Starbucks Stops Writing 'Race Together' On Your Latte 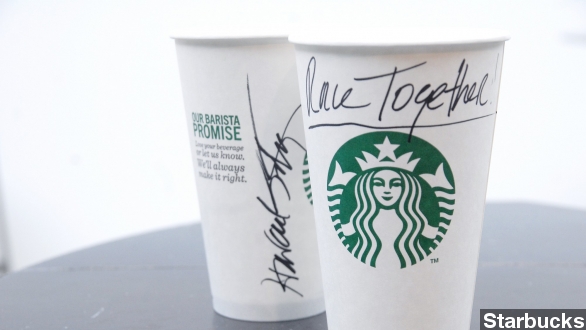 After a week, Starbucks employees will no longer be asked to write the phrase "Race Together" on customers' cups — but the company's push to discuss race goes on.

In a letter on Starbucks' website, CEO Howard Schultz said the move "was always just the catalyst for a much broader and longer term conversation" and that it was originally planned to end on Sunday.

The company says the decision to end the campaign had nothing to do with the pushback it received — and there was a lot of it.

"Do we really expect some poor barista to handle a conversation on racial politics? That's a lot of pressure. Who are they going to get, Cornel West?" said Larry Wilmore on "The Nightly Show."

"I ordered a black coffee, and he told me they're no longer called 'black,' it's called 'uncreamed.' So I immediately had to recoil," said Dennis Miller on Fox News.

But Schultz obviously saw at least some of the reaction coming, judging from the video where he announced the campaign.

He also made the media rounds talking up the value of conversations on race and answering tough questions from skeptical interviewers. (Video via CBS)

"I say hello to these people, they say hello to me. I like it. I've never noticed before whether they were African American or Caucasian. Now I do. Is that good or bad?" asked CNBC's Jim Kramer.

"In all fairness, Jim, I don't think that's the question," said Schultz.

But amid the skepticism and an overwhelming amount of Internet snark, Schultz's plan had some defenders.

"I know a lot people are going to have a problem with me saying this, but I think it's a great place to start. I love it," said Fox News's Eric Bolling.

"Starbucks has still started a conversation on race that was not happening before they made their announcement," Janus Adams told CBS.

So what's next for "Race Together"? Schultz says the company plans to hire 10,000 minority youths over the next three years, put inserts on race into three upcoming editions of USA Today and do what it can to foster dialogue.

But the company won't be holding up lines by encouraging conversations on race with baristas.