Starbucks Is Giving Its Iced Coffee A Nitrogen Boost 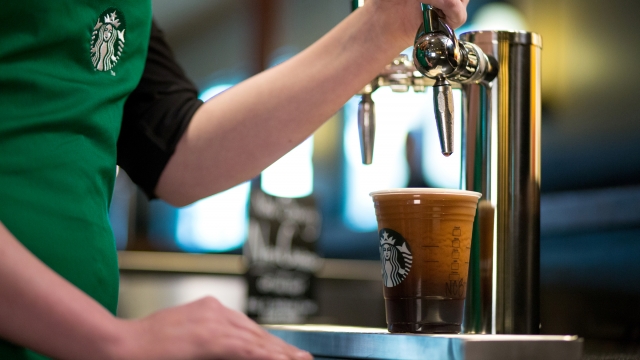 The coffee giant announced Tuesday it's expanding its menu to include a greater variety of cold drinks — some of which include nitrogen.

That roster, which consists of both iced coffee and iced espresso, makes up what Starbucks now calls its "cold bar." And if you're thinking it pretty much looks like a beer tap — that's actually what Starbucks was going for.

"It almost comes out like a Guinness beer. But these are craft products — not dissimilar to the trend of craft beer. It's perfectly positioned for the millennials," Starbucks CEO Howard Schultz told CNNMoney.

This nitrogen-infused coffee-on-tap idea is known as nitro coffee, and it was a big trend in 2015.

"The coffee is cold-brewed, put into a keg and then infused with nitrogen and poured from a tap. That nitrogen infusion creates a slightly carbonated cup of coffee with a creamy beer-like head," CBS' Marlie Hall reported.

The coffee is super strong, though. Bon Appétit reports some people feel like they've had two full espressos after only drinking half a glass of the nitro coffee.

Prior to Tuesday's announcement, Starbucks had been testing its version of nitro coffee in its Starbucks Reserve Roastery and Tasting Room in Seattle.

Currently, the Nitro Cold Brew is the second-highest-selling drink at that location.

Starbucks' nitro coffee will now be available in 500 U.S. locations.