Starbucks' Chief Is Leaving, Which Could Fuel Speculation On 2020 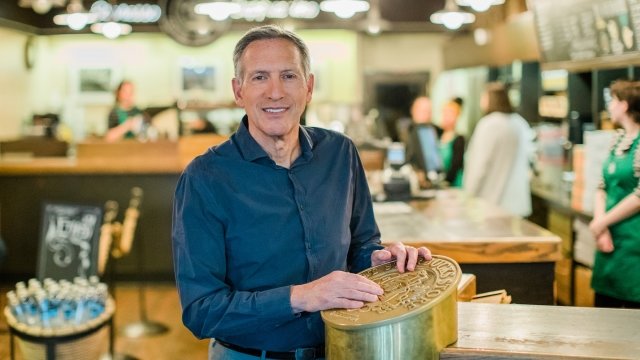 SMS
Starbucks' Chief Is Leaving, Which Could Fuel Speculation On 2020
By James Packard
By James Packard
June 4, 2018
Howard Schultz has been outspoken on social and political issues, and his departure won't do much to quiet speculation about a run for public office.
SHOW TRANSCRIPT

Starbucks Executive Chairman Howard Schultz is stepping down from his role with the coffee chain. That could fuel speculation about his political plans. But let's be clear: There aren't any absolute indications that he's headed for public office.

Schultz told employees Monday he's leaving after 37 years with the company. Under his leadership, Starbucks grew from 11 stores to more than 28,000. He also oversaw the company's introduction on Wall Street and a value growth of more than 21,000 percent.

Schultz has also been outspoken on social and political issues. In his role as Starbucks' chief, he's talked race, veterans' issues, same-sex marriage and guns, among other issues.

He's a supporter of former President Barack Obama, and he backed Hillary Clinton in 2016.

Not likely to quiet speculation about what's next: He's writing a book. Starbucks says he's penning a story about what it calls "Starbucks' social impact work and the efforts to redefine the role and responsibility of a public company in an ever-changing society."

Schultz's departure takes effect June 26, though he'll still oversee the openings of two roasteries in Italy and New York later in the year.