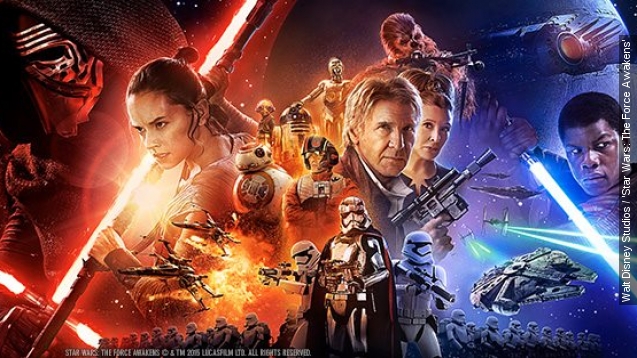 The final "Star Wars" trailer debuted during "Monday Night Football"'s Giants vs. Eagles halftime, which subsequently forced the Internet to have a meltdown faster than when Kim Kardashian broke it. (Video via Walt Disney Studios / "Star Wars: The Force Awakens")

The anticipation for the trailer and the movie has been out of control. But after we saw the trailer, we pretty much had the same reaction as John Boyega, one of the new "Star Wars" stars.

And Disney's massive promotional push for the film doesn't stop at infiltrating ESPN — which, by the way, making "Star Wars" fans watch sports to see the trailer is pure evil.

"Good Morning America"'s Twitter account has also been promoting the film, asking fans if they've bought tickets and boasting about the trailer's tens of millions of views.

Not to mention the enormous efforts to not only draw on the nostalgia of life-long "Star Wars" fans but also to attract young people.

The massive toy push on Force Friday had stores like Toys "R" Us, Target and Wal-Mart releasing products three months ahead of the movie's debut.

The products have helped kept the franchise alive for so long. Deadline reports over $20 billion dollars have been spent on "Star Wars" merchandise since the first film in 1977. (Video via The Wall Street Journal)

And for this new film alone, analysts are estimating consumers will snag $5 billion worth of merchandise over the next year. (Video via Walt Disney Studios / "Star Wars: The Force Awakens")

We can clearly see the force is with this film. And if it continues, analysts believe this could go on to become the third highest-grossing film in history. Which of course, would beat out that summer juggernaut "Jurassic World." (Video via Walt Disney Studios / "Star Wars: The Force Awakens")