'Star Wars' Toys Are As Big As The Movies 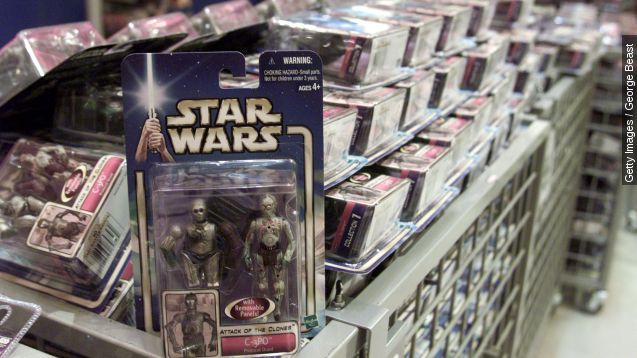 It's not a "Star Wars" movie without new "Star Wars" toys to go with it. (Video via 20th Century Fox)

What started with wildly popular action figures in 1977 and 1978 now includes app-controlled droids and the latest editions of the now-iconic lightsaber. Disney is showing all of it off now in an 18-hour stream across four continents. (Video via Go Sphero, Star Wars)

The marathon spectacle of social media excess could only happen in this day and age, but this subject is hardly new. "Star Wars" toys are as old as "Star Wars."

When George Lucas negotiated distribution of "Episode IV" with 20th Century Fox, he waived his half-million-dollar director fee and chose instead to hold on to exclusive licensing and merchandising rights. (Video via 20th Century Fox Television)

That decision paid off like basically nothing else in cinema. Since "Star Wars" debuted in 1977, the franchise has raked in more than $20 billion in licensing revenue: more than four times what the films ever grossed in theaters. (Video via 20th Century Fox)

Analysts say the secret to "Star Wars"' success is a sustained popularity that few other brands can match.

The original action figures, for example, exploded in popularity overnight. The Kenner toy company couldn't make them fast enough and wound up selling IOUs during the 1977 Christmas shopping season.

Since then, the franchise has ballooned to basically every medium imaginable: comics and books, costumes, bedsheets, video games and even theme park attractions. (Video via Electronic Arts, Disney Parks)

Lucasfilm even got Lego to license its material. It was the first time Lego ever bought into an external brand, and the decision has paid off quite well for the brick-makers. Lego says sales of its constructible starships are as strong as ever and only growing. (video via Wired)

And, yes, Lego has new models ready to go for "Episode VII." You can catch sneak previews, if you don’t mind potential spoilers, on the "Star Wars" stream. (Video via Star Wars)