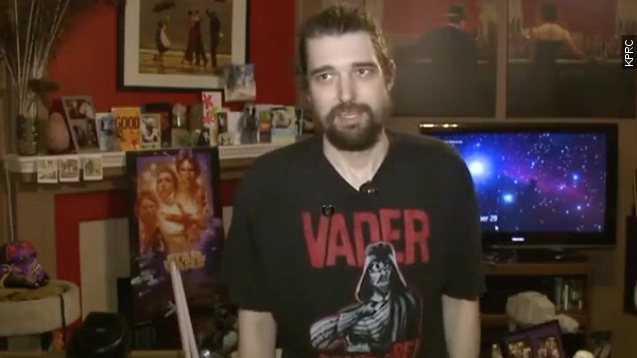 SMS
'Star Wars' Fan Who Saw 'The Force Awakens' Early Has Died
By Ben Lawson
By Ben Lawson
November 10, 2015
Shortly after his dying wish of seeing the seventh "Star Wars" movie was fulfilled, Daniel Fleetwood passed away in his sleep.
SHOW TRANSCRIPT

Daniel Fleetwood, the "Star Wars" fan diagnosed with terminal cancer, has died just five days after he was granted an early screening of "The Force Awakens." (Video via Walt Disney Studios / "Star Wars: The Force Awakens")

Fleetwood's wife, Ashley, made the announcement on Facebook, saying Daniel passed away "in his sleep and in peace."

Daniel was battling spindle cell sarcoma. He told KPRC his dying wish was to see the seventh "Star Wars" film.

"Judging by how progressive the disease has gotten in the last two months, I really don't think I'll be able to make it," Daniels said.

Walt Disney Studios granted his request and allowed him to view an unedited version of the movie in his living room. He also received a call from director J.J. Abrams before watching the movie.

Following Daniel's death, "The Force Awakens" star John Boyega tweeted, "Glad you got to see the movie more importantly that you slept in peace. God bless you man."