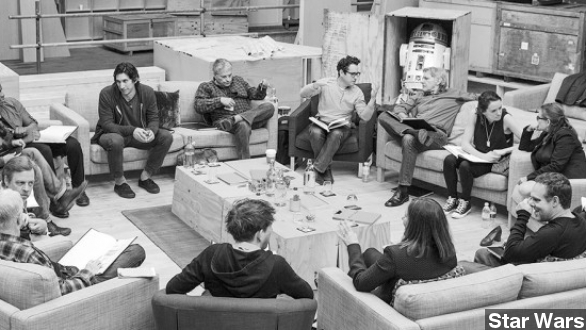 All the rumors about original "Star Wars" cast members being part of the new movie had hardcore fans thinking, "It's a trap!" But now it's official — the cast for Episode VII will include the return of Luke, Leia, and Han.

Believe it! News from the official website shows a roundtable read featuring Mark Hamill, Carrie Fisher, and Harrison Ford.  The site also confirms rumors which hinted "Inside Llewyn Davis" star Oscar Issac and his co-star Adam Driver, who might play a villain, will be in the mix.  Plus, "Attack the Block" actor John Boyega who was rumored by Deadline to be in talks earlier.

JJ Abrams' commented, "It is both thrilling and surreal to watch the beloved original cast and these brilliant new performers come together to bring this world to life, once again. We start shooting in a couple of weeks, and everyone is doing their best to make the fans proud." (Via Star Wars)

However, fans and the media didn't need the Force to see this one coming! Last week, all three original cast members had been quietly popping up in London, which coincidentally happens to be the place where JJ Abrams will direct the seventh installment of the sci-fi franchise.  It’s slated to begin shooting at Pinewood Studios next month.

The evidence includes this tweet from Phantom Menace star Peter (Sara-Fenn-Ah-Witch) Serafinowicz. It shows him hanging with Mark Hamill and asks "I wonder why he's here?".

Princess Leia, better known as Carrie Fisher, also took to Twitter with this riddle, "So my do dog Gary has been spotted in London, but apparently without me. Who has he been seeing? Let me know if you have any clues."

And finally, The Digital Spy reports photographers spotted Harrison Ford leaving a London restaurant late last week.  Many in the media, like MTV have kept a close eye on Han Solo after reports surfaced claiming he would take on a "gigantic" role in the new flick.

Not much is known about the next episode’s storyline, except it’s reported the events take place about 30 years after "Return of the Jedi" — the perfect spot to combine the old and new generations, wouldn’t you agree?