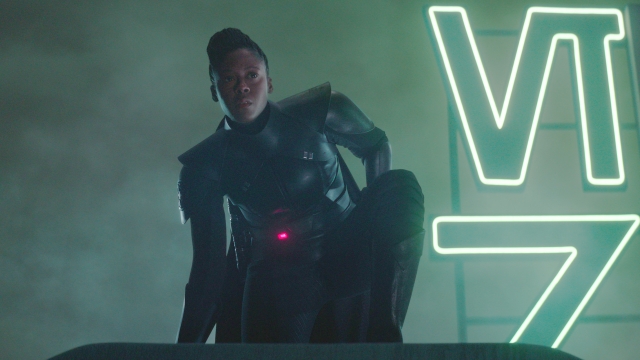 The new "Obi-Wan Kenobi" Star Wars series had barely premiered when a small part of the fandom went to the dark side — sending actor Moses Ingram racist and even threatening messages she then posted to Instagram.

"There are hundreds of those… hundreds," she said. "There's nothing anybody can do to stop this hate. And so, I question what my purpose is even being here in front of you saying that this is happening."

Toxic backlash is not new and not exclusive to Star Wars. A vocal minority of mostly anonymous trolls often target actors of color.

"I was disappointed," she said. "I was sad for her. I was upset and furious at the fandom."

Star Wars struck back at the hate, tweeting "There are more than 20 million sentient species in the Star Wars Galaxy. Don't choose to be a racist."

"It just sickened me to my stomach that this had been happening," he said. "We stand with Moses. We love Moses. And if you're sending her bullying messages, you're no Star Wars fan in my mind."

Some fans were happy to see Star Wars defending Ingram, but others wish it had done more when actors John Boyega and Kelly Marie Tran got the same treatment when they made their own Star Wars debuts. Trolls drove Tran off social media.

"I think the thing that bothers me is that ... This feeling like I've just got to shut up and take it. I gotta grin and bear it.  And I'm not built like that," Ingram said.

Broadnax says the number of positive fans will ultimately outweigh the bad.

"This is going to be a thing. The Star Wars, Disney Universe is going to have more inclusion in their films and shows," Broadnax said. "There's really great fandoms out there that promote people of color, that promote women that these fans can go to have a safe space."

While the trolls won't be defeated anytime soon, fans say they aren't going anywhere either.