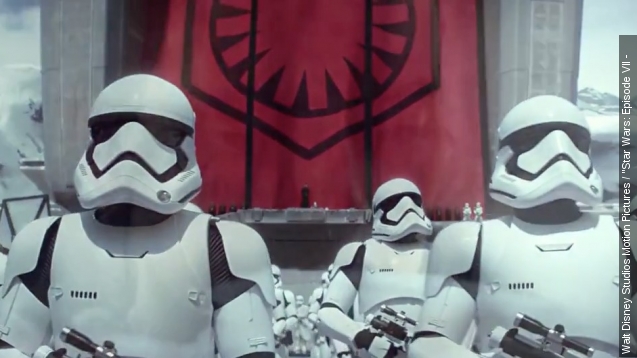 If any movie stands a chance at beating the massive opening weekend box office numbers that "Jurassic World" made, it'd be the upcoming "Star Wars: Episode VII - The Force Awakens."

If you were one of the few people who didn't go see the dinosaur flick, "Jurassic World" took in a staggering $512 million globally. Variety pointed out it's the first movie to have ever raked in "more than $500 million in a single weekend."

But the new "Star Wars" movie has all the makings of being one with the Force.

First off, it's a sequel to a huge franchise. The previous six "Star Wars" films have grossed a combined $4.3 billion worldwide. Yes, that's a "b" — billion. (Video via 20th Century Fox / "Star Wars: Episode III - Revenge of the Sith")

And the seventh film upped its nostalgia factor even more by bringing back many familiar faces, like Harrison Ford, Mark Hamill and Carrie Fisher to reprise their roles from the first three movies.

Even the droids C-3PO and R2-D2 are set to return. (Video via 20th Century Fox / "Star Wars: Episode V - The Empire Strikes Back")

Now, part of the reason "Jurassic World" performed so well at the box office was because it showed in 3-D and IMAX formats.

But don't wave your lightsaber around and fret. Disney wants their audience to be able to experience "Star Wars" on the really big screen, too.

Since IMAX ticket prices run an average of $8 higher than regular movie theater prices, expect to see quite a bit of money raked in for "Star Wars: Episode VII - The Force Awakens."

And finally — the last reason the upcoming "Star Wars" film should do really, really well? Theme parks. Stick with us for a moment.

The Hollywood Reporter credited Universal's theme parks with "Jurassic World"'s success, pointing out that attendance has been up the past four years.

While, Disney's Hollywood Studios in Florida currently has a "Star Wars"-themed attraction, expect to see a whole lot more in the coming years.The company's CEO told Variety they're working "to greatly increase 'Star Wars'' presence in multiple locations around the world." (Video via Disney)

"Star Wars: Episode VII - The Force Awakens" hits theaters in December. Guess we'll wait and see if it's better received on the Dark side or Light side of the Force.