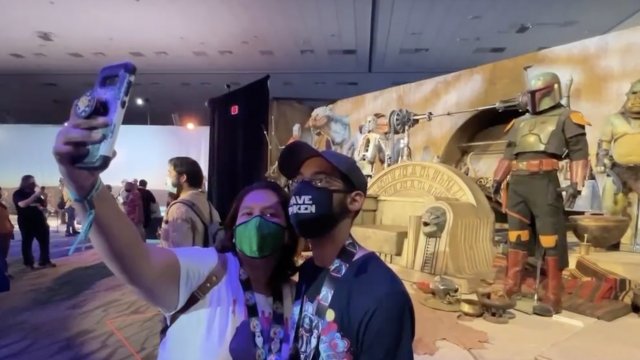 For a few days, the center of the Star Wars galaxy is Anaheim California. It's an invasion of tens of thousands of fans, Imperial stormtroopers, porgs and droids.

The four day convention is a collector’s paradise. Steve Sansweet owns the largest collection of Star Wars merchandise, and teamed up with fellow collectors to show off a few rarities to other fans.

And sometimes the line blurs between “actor” and “fan”. Carey Jones plays the Wookiee Krrsantan on the series "Book of Boba Fett." He came to check out an exhibit featuring props from that show, and The Mandalorian.

"As a kid, I had the Star Wars bedsheets, pillowcases, drapes, the whole bit," Jones says. "And to be a part of it on the other end is mind blowing. To see these fans come in, I see myself in them, and I want to give them everything I wanted as a kid."