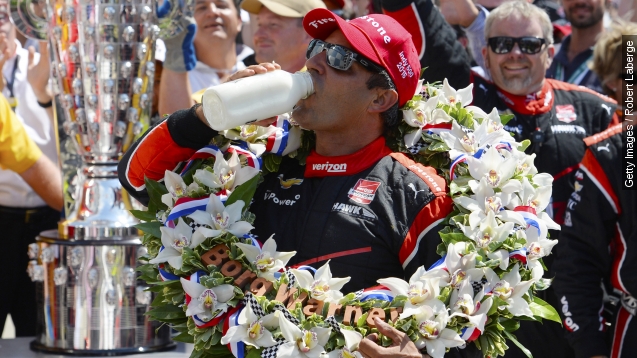 Juan Pablo Montoya won the Indianapolis 500 for the second time Sunday. Before his victory, he shared the spotlight with a few celebrities.

And it was pretty tight finish. In the final 15 laps, three racers drove neck-and-neck-and-neck: Montoya, Will Power and Scott Dixon — with multiple lead changes.

But it was Montoya who edged out his competitors to win his second Indy 500. He previously won the race in 2000.

After the race, he said: "This is what racing in IndyCar is all about. Awesome racing all the way down to the wire."

In other cool moments from the event, fans were treated to perhaps the most overqualified pace car driver in recent memory: four-time Sprint Cup champion Jeff Gordon.

Gordon, one of the most popular and decorated NASCAR drivers in history, who also plans to retire at the end of the season, set pace in a sleek Chevrolet Corvette.

"It's not just a thrill to be here and be the pace car driver, but I get to drive a very cool car also," Gordon said.

"In light of all of this praise, merited or not, do me a favor and save a little for my funeral," Letterman said.

And, speaking of retirement, David Letterman was on hand and clued us in to at least one item on his post-retirement agenda.

"We all followed the end of the show, and we now know that you're gonna be at a lot more races. Is that right?" WISH racing analyst Derek Daly said.

"That's right. I think I'll move back to Indiana and get a paper route," Letterman said.

And this year, the former "Late Show" host was treated to a special retirement gift: his face and name on his team's car driven by Oriol Servia. #ThanksDave was painted on its side.

"The fact that my name is on the car, ... I never in my wildest dreams expected anything like that. This is a really great, silly and exciting at the same time," Letterman said.

As for this year's winner, according to Sports Illustrated, "Montoya now owns the record for the longest time between [Indy 500] victories" at 15 years.