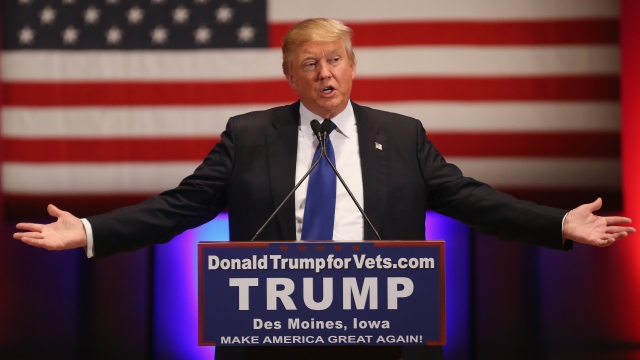 Donald Trump is being widely criticized for a Hillary Clinton meme he tweeted Saturday.

The meme — seen here in a screen grab — shows Clinton against a background of hundred-dollar bills and what appears to be a Star of David with the phrase, "Most corrupt candidate ever."

The meme started circulating last month on an image-board website known for racist and anti-Semitic posts. A week earlier, the meme appeared on a Twitter account that frequently posted anti-Clinton and anti-Muslim memes. The account has since been deleted.

Trump ended up deleting the tweet and reposting a new version, this time with a circle instead of the star. He also used the hashtag #AmericaFirst.

In April, the Anti-Defamation League urged Trump to reconsider using the phrase because the "America First" movement in the early 1940s had anti-Semitic associations.

"A tweet is a simple tweet, and the bottom line is you can read into things that aren't there," Corey Lewandowski said on "State of the Union."

Trump has said he's pro-Israel and just last week condemned the killings of Israelis in the West Bank.

"Israel is a very, very important ally of the United States, and we are going to protect them 100 percent," Trump said.

He made that statement last week after an attendee at a campaign event said he didn't want military funding to go toward what he called "Zionist Israel."

As of Sunday afternoon, Trump and his campaign hadn't commented on the meme. Neither had his daughter, Ivanka, nor her husband, Jared Kushner, who's working on the campaign. Both family members are Jewish.