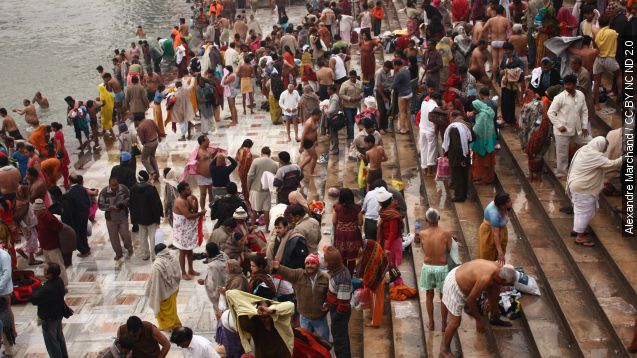 At least 27 are dead after a human stampede occurred at a religious pilgrimage in India.

The stampede occurred around 8 a.m. local time at a religious festival in the Rajahmundry district. Officials say what triggered it was people coming and going from the Maha Pushkaralu festival. (Video via ABN Telugu)

As you can see from this NTV Telugu footage, massive crowds turned into chaos at the gathering, leading to deaths and additional injuries. The Hindustan Times reports ambulances had trouble getting to the area as roads were overcrowded with pilgrims.

The stampede occurred shortly after India's Prime Minister Narendra Modi wished the pilgrims visiting the area well. He later tweeted: "Deeply pained at the loss of lives due to stampede at Rajahmundry. My condolences to the families of the deceased & prayers with the injured."

The Indian Express explains police were fearful of stampedes leading up to the pilgrimage, so they tried to plan accordingly. "At every ghat, the traffic will move 'unidirection' only. ... If the crowds swells, we will release new batch only when the previous patrons have left the ghat," the Nashik police commissioner told the outlet.

The religious Hindu festival involves pilgrims dipping themselves in the holy Godavari River to rid them of their sins. About 24 million pilgrims are expected to take part in the 12-day festival this year making it one of the largest pilgrimages in the world. (Video via ABP News)

Stampedes at religious festivals in India aren't uncommon. A similar one happened during a religious festival in 2013 in Madhya Pradesh when fears of a bridge collapsing triggered the panic; 115 people died mainly from being trampled or drowning after jumping into the river below. (Video via NTDTV, Al Jazeera)