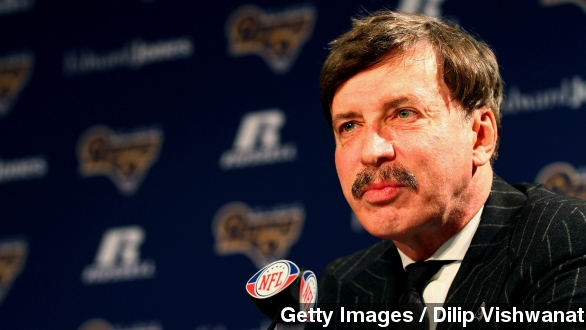 About two decades later, the Los Angeles Rams might just be a thing again.

A detailed report by the Los Angeles Times says current St. Louis Rams owner Stan Kroenke plans to build a stadium in Inglewood, Calif., a city just outside of Los Angeles. The plan, the Times reports, is to build an 80,000-seat NFL stadium in the area with an expected completion of 2018.

Monday's report is the most concrete evidence so far that the Rams more-or-less have their foot out the door in St. Louis.

Rumors of the team moving have been around for a while, even more so when Kroenke bought the team in 2010. The Rams and owners of their stadium, the Edward Jones Dome, haven't been able to strike a deal to upgrade it. (Video via KMOV)

The site for the Inglewood stadium is reported to be where Kroenke bought land last year — a 60-acre parking lot previously owned by Wal-Mart. Kroenke and neighboring owners of a 238-acre site Hollywood Park Stockbridge Capital group will reportedly team up for the project.

Now the announcement doesn't mean the Rams are moving ... yet.

Negotiations are continuing between the Rams, the city of St. Louis and their current stadium owners.

NFL commissioner Roger Goodell announced last month that no NFL team would be making a move to Los Angeles for the 2015 season, so 2016 would be the soonest one could move.

Any NFL team looking to relocate would need approval from three-fourths of NFL owners.