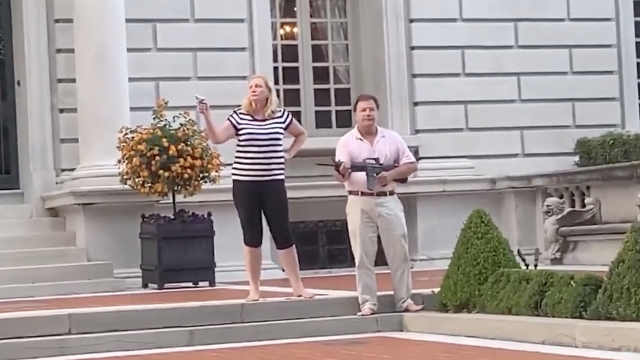 SMS
St. Louis Couple Points Guns At Protesters Passing Their House
By Bailey Vogt
By Bailey Vogt
June 29, 2020
The couple, Mark and Patricia McCloskey, were photographed holding a rifle and a pistol Sunday on their front lawn.
SHOW TRANSCRIPT

A St. Louis couple drew guns on a group of demonstrators passing by their house in a gated neighborhood.

In a viral video, the couple — identified as personal injury lawyers Mark and Patricia McCloskey — are shown holding a rifle and pistol, respectively, on the front lawn of their home Sunday. They pointed the weapons at protesters but did not fire.

Mark McCloskey later told local news station KMOV the protesters "rushed towards" his home during dinner and threatened to kill his family and dog and burn his house.

Authorities said the couple saw weapons in the crowd and armed themselves in response, according to The Associated Press. No charges have been filed. Police say an investigation is ongoing, but the case is being treated as trespassing and intimidation by the protesters.

The protesters were on their way to the home of St. Louis Mayor Lyda Krewson, who is being called on to resign after she announced the names and addresses of several residents who asked her to defund the police.