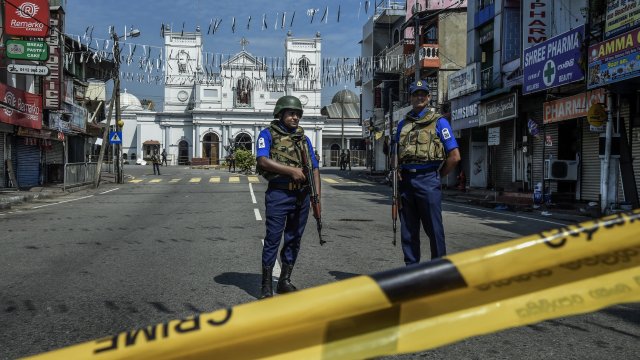 SMS
Sri Lanka's Defense Secretary Resigns Amid Backlash Over Bombings
By Briana Koeneman
By Briana Koeneman
April 25, 2019
He confirmed his resignation to Reuters Thursday, saying he was taking responsibility for the failures of the institutions he headed.
SHOW TRANSCRIPT

He confirmed his resignation to Reuters Thursday, saying he was taking responsibility for the failures of the institutions he headed.

He also said security agencies were in the process of responding to intelligence reports warning of possible attacks before Sunday's bombings.

On Wednesday, Sri Lanka's president called on both the defense secretary and police chief to resign amid growing public outrage over the attacks.

Sri Lanka's deputy inspector general of police reportedly signed a letter earlier this month warning the country's security agencies that a local group was planning a suicide attack. But it's unclear what steps — if any — were taken to prevent it. Officials are currently looking into who knew what ahead of the blasts.

ISIS claimed responsibility for the bombings on Tuesday. Officials have pointed the finger at two local Islamist militant groups for orchestrating the attacks, likely with support from outside the country.