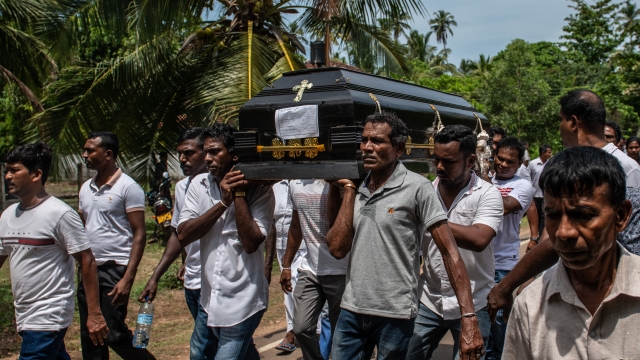 Funerals took place on Tuesday for some of the victims of Sunday's terror attacks in Sri Lanka. Tuesday has been declared a national day of mourning.

Earlier in the day, ISIS claimed responsibility for the bombings via its Amaq news agency. But the group didn't provide any evidence to back up its claim. Authorities have arrested 40 people allegedly involved in the attacks.

At least eight explosions in Sri Lanka left more than 300 people dead and at least 500 others injured Sunday morning. The attacks killed both locals and foreigners. They marked the worst violence in the country since the end of Sri Lanka's civil war in 2009.

Officials in Sri Lanka previously accused a local Islamist militant group of orchestrating the attacks, likely with support from outside the country.

On Tuesday, the country's defense minister said the blasts might have been in retaliation for the shootings at two mosques in New Zealand last month. He said authorities now believe two local groups were behind the Sri Lanka attacks.

According to the Associated Press, Sri Lanka's deputy inspector general of police signed a letter earlier this month warning the country's security agencies that a local group was planning a suicide attack. But it's unclear what steps — if any — were taken to prevent it. Officials are currently looking into who knew what ahead of the blasts.