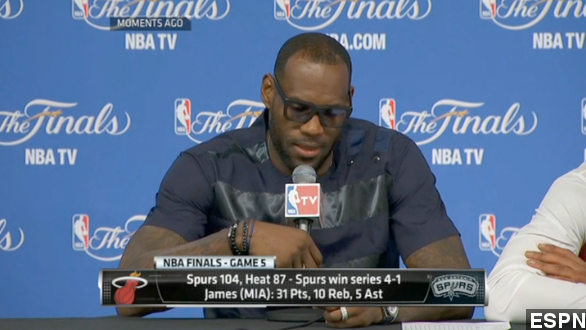 Enjoy it while it lasts, San Antonio Spurs fans. All 24 hours of it before people stop talking title and start talking what's next. Who are we kidding? It didn't even last that long.

JOE CARTER, BLEACHER REPORT ANALYST: "The Finals loss is certainly going to make for an interesting summer in South Beach. The future of the 'Big 3' is in the air. Lebron, Wade and Bosh can all opt out of their contracts and leave Miami if they so choose." (Via CNN)

Well, that didn't take long. As ESPN and most every other sports media outlet we could name report, none of the so-called "Big 3" in Miami have to come back to the Heat next year despite starting together with such huge expectations.

​That now infamous bravado Lebron James showed in 2010 when he signed with the Heat and predicted — well, you heard how many championships — didn't earn him many sympathizers for the times he, Dwyane Wade and Chris Bosh didn't bring home a trophy.

In a postgame press conference, James opted to talk more about his years in Miami with four NBA Finals appearances and two titles. He mostly sidestepped questions about the future. (Via Sports Illustrated)

LEBRON JAMES: "All three of us, that's the last thing the three of us are thinking about is what's going on this summer." (Via ESPN)

But wait, what about the team that actually won?

For all the talk of teams in Miami and Los Angeles the last decade and a half, the Spurs won five NBA titles in the last 16 seasons. (Via ABC)

The man driving that dynasty — Tim Duncan. The seemingly ageless power forward not only got a hug from his equally successful coach Gregg Popovich, Sportscenter's tweet pointing out Duncan won the title on Father's Day had more than 14,000 retweets by Monday morning. (Via Twitter / @NBATV, Twitter / @Sportscenter)

But Duncan is 38, and questions over his possible retirement and the chance to go out on top were inevitable.

For the record, Duncan says that's how he feels right now. Many sports reporters speculate the Big 3 will all stay in Miami and Popovich says he wants to continue coaching the Spurs. He also said he didn't think he'd have to answer those kind of questions the same day he won a title.