Spurs Hire Of Hammon Could Lead To More Female Coaches 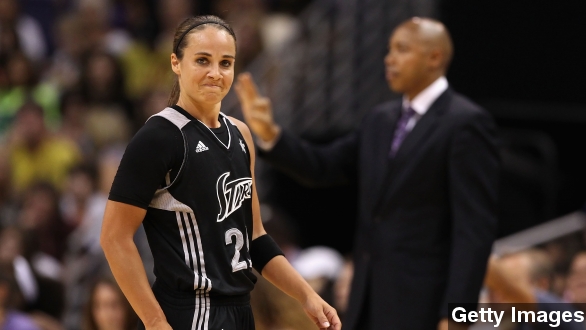 The NBA's current champion, the San Antonio Spurs, seem to make history on and off the court. (Via Getty Images)

Tuesday, the Spurs announced Becky Hammon would be joining the coaching staff, making her the first regular season female assistant coach hired by the NBA in the league's almost seven-decade-long history. (Via Getty Images)

Spurs Head Coach Gregg  Popovich said in a statement about the hire, "Having observed her working with our team this past season, I’m confident her basketball IQ, work ethic and interpersonal skills will be a great benefit to the Spurs."

And by played, we mean dominated. Hammon is the San Antonio Stars all-time leader in assists and three pointers, the second all-time leader for the franchise in points and just the seventh WNBA player in history to score 5,000 points. (Via Getty Images)

Lisa Boyer, a former WNBA coach, worked as a "volunteer assistant coach" with the Cleveland Cavaliers back in 2001, meaning her paycheck was coming from WNBA team the Cleveland Rockers and not the Cavaliers. (Via Getty Images)

Also, Natalie Nakase just this month coached summer league play for the Los Angeles Clippers after being video coordinator for the team.

"He just pulled me in and he said, 'Would you want to coach summer league?' ... My first response was shock, and then I said 'yes' right away. ... If I say the right things, and things that can help them, then they'll listen, no matter how tall I am or if I'm a female." (Via NPR)

Women's basketball legend Nancy Lieberman is the assistant general manager of the Texas Legends, the D-League team for the Dallas Mavericks, and as some have pointed out may be the logical choice to be the next to make the leap into coaching NBA ball. (Via NBC, Twitter / @JeffZillgitt)

She told the New York Times, "First and foremost, this means respect. ... She did not get hired just because she is a woman. She was hired because she was qualified, because they know her personality, how she interacts with players, how she understands X’s and O’s."

If rumors are true, Hammon will get her first taste of an NBA sideline with the first game of the NBA regular season when the San Antonio Spurs take on the new and improved Cleveland Cavaliers.