What Some In The Sports World Are Saying About Trump's Win 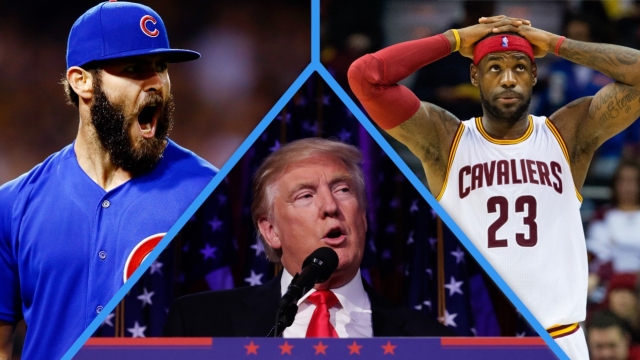 SMS
What Some In The Sports World Are Saying About Trump's Win
By Carter Woodiel
By Carter Woodiel
November 12, 2016
Major sports figures on both sides of the political spectrum have sounded off about the result of the presidential election.
SHOW TRANSCRIPT

"The whole process has left us all feeling kind of disgusted and disappointed. I thought we were better than this," Golden State Warriors head coach Steve Kerr said of the 2016 election.

Golden State Warriors head coach Steve Kerr isn't the only NBA coach expressing his distaste for the result and the election in general. The Detroit Pistons' Stan Van Gundy was even more direct.

"We have just thrown a good part of our population under the bus. And I have problems with thinking that this is where we are as a country," Van Gundy said.

Three-time coach of the year Gregg Popovich also had his own strongly worded message.

"I'm a rich white guy, and I'm sick to my stomach thinking about it. I can't imagine being a Muslim right now, or a woman, or an African-American, a Hispanic, a handicapped person — how disenfranchised they might feel," Popovich said on the San Antonio Express News' Spurs Nation podcast.

The NBA's on-court stars have weighed in, too. LeBron James, who campaigned for Hillary Clinton in the lead-up to the election, said watching it was "difficult" but that "our nation has never been built on one guy."

Still, LeBron isn't sure he'd visit a Trump White House if his team wins an NBA title in the next four years, saying, "We'll have to cross that road if we get to it."

But sports figures aren't all falling on the anti-Trump side of the spectrum. There are plenty who were just fine about Tuesday's result, including UFC President Dana White, who spoke at the Republican National Convention earlier this year.

And former Cy Young Award-winning pitcher Jake Arrieta made a splash on Twitter after the election, saying he'd pack the bags of Hollywood celebrities who said they'd leave the U.S. if Trump won.

But not everyone is so quick to take a side. New England Patriots quarterback Tom Brady had a "Make America Great Again" hat in his locker at one point but says his vote is personal and he just wants to stick to sports.

And while San Fransisco 49ers QB Colin Kaepernick doesn't have an issue bringing up politics — like when he takes a knee during the national anthem before his games — he said he's so unhappy with both candidates that he didn't vote on Election Day.