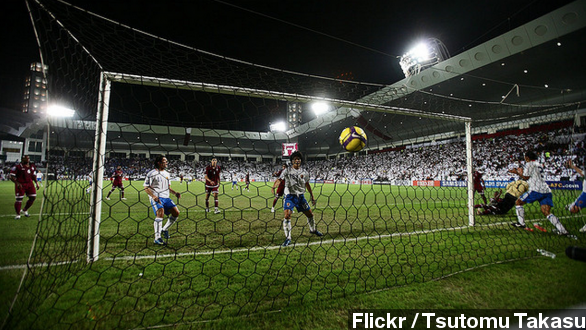 Major sponsors are now getting involved in FIFA's investigation into how exactly Qatar won the bid for the 2022 World Cup.

Sony, Adidas and Visa are all calling for a thorough investigation into whether Qatar officials bribed certain FIFA officials to win the rights to host the 2022 World Cup.

Britain's The Sunday Times reportedly obtained "leaked" documents from negotiations claiming bribery did happen during the processing. An investigation into these allegations was announced by FIFA last week.

Sony told The Sunday Times, "As a FIFA partner, we expect these allegations to be investigated appropriately. ... We continue to expect FIFA to adhere to its principles of integrity, ethics and fair play across all aspects of its operations."

Sony's partnership with FIFA is reportedly worth more than $300 million — making it one of the World Cup's biggest sponsors. (Via Sony)

The Independent says FIFA now has a lawyer in New York working on an investigation to determine whether bribery or corruption were deciding factors in Qatar to host the games.

This comes a week after The Telegraph reported Mohamed Bin Hammam allegedly used Qatar's government and royal family to try and influence voters to choose Qatar.

FIFA awarded Qatar the World Cup back in late 2010, but the group's current vice president says he wouldn't be against moving the games to another country if allegations about the bidding process were found to be true. (Via BBC)

The World Cup organizing committee in Qatar says it fairly won the right to host the 2022 World Cup. The 2014 World Cup starts Thursday.