Spinosaurus Could Be First Semi-Aquatic Dinosaur 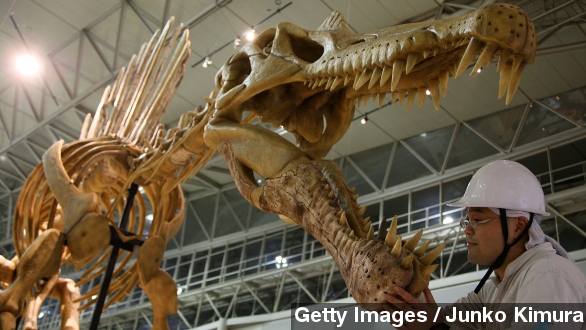 By Ben Lawson
September 11, 2014
New research has shown that the Spinosaurus, the largest carnivorous dinosaur, might have been just as well suited for life in the water as on land.
SHOW TRANSCRIPT

Spinosaurus, the largest of all carnivorous dinosaurs, may have been just as well-equipped for life in the water as on land.

The Cretaceous-era dinosaur was even bigger than T. Rex and measured in at 50 feet long with a sail on its back as tall as an adult man. And a new fossil construction suggests the creature likely stalked prey by moving through the water like a crocodile.

The report, published Thursday in the journal Science, says new fossils show Spinosaurus had rake-like teeth perfect for pulling in fish, had nostrils part way up its snout making it easier to breath in the water and was likely incapable of standing on two legs.

A dinosaur expert explains to National Geographic that the creature's narrow hips and short thighs are big clues that it likely spent a lot of time in the water. "This doesn't make much sense for a land animal that makes a living chasing other land animals. But if it is an animal that doesn't spend most of its time on land, but instead in the water, it doesn't need strong leg muscles."

A paleontologist told The New York Times the evidence that the creature lived a semi-aquatic lifestyle was "quite convincing" but only added to the animal's strangeness, referring to the way it moved on land with four legs.

LiveScience says that while this discovery answers a lot of questions about the Spinosaurus, it still doesn't provide an explanation for the enormous sail on its back. The most accepted theory is that it served some sort of display function.

It's pretty crazy this research happened at all. The most complete skeleton of Spinosaurus was destroyed in 1944 when the British Royal Air Force accidentally bombed a Munich paleontology museum during World War II.

The Guardian says this led to a sort of dry spell for research on the creature until Nazir Ibrahim, the new study's lead author, got lucky when a stranger handed him a box of fossils that happened to be from a Spinosaurus.

The first bones of a Spinosaurus were discovered in an Egyptian desert in 1911.