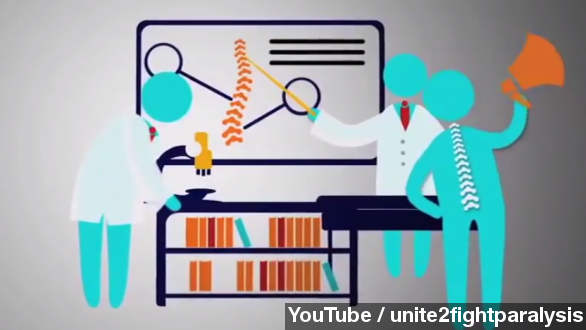 An idea from two graduate students at Case Western Reserve University in Ohio could revolutionize treatments for people with broken and injured spinal cords.

It all comes down to scar tissue, which surrounds an injury in the body. (Video via NBC)

"Sugary proteins" released by the scar tissue make a type of "glue" that discourages nerve cells from growing. One scientist likened the proteins to fly paper that traps the nerve cells.

If the nerve cells don't grow back, people often face paralysis below the injury and a loss of urinary and genital control. (Video via YouTube / unite2fightparalysis)

But the graduate students at Case Western designed a compound that helps the nerve cells avoid the sticky trap of the sugary proteins. They injected it into rats with spinal injuries.

A whopping 80 percent of the rats injected displayed bladder control improvement, movement improvement, or both, according to the study, which was published in Nature.

It's important to remember that all of the rats in the study were newly injured, so the compound might not work as well on older injuries. But those rats who responded, responded well.

Professor Silver told the BBC: "What we could see was really remarkable. Some recovered to a fantastic extent and so well you could hardly tell there was an injury."

This treatment would be less invasive, with potentially higher efficacy.

This video includes an image by Michael Dorausch / CC BY SA 2.0 and music from Broke For Free / CC BY NC 3.0.