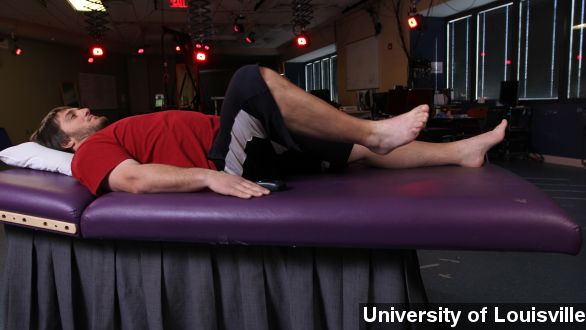 SMS
'Dream Come True' Research Has Paralyzed Men Moving Again
By Nichole Cartmell
By Nichole Cartmell
April 8, 2014
Some in the medical community are calling it a "breakthrough" — paralyzed people are able to move again with new research.
SHOW TRANSCRIPT

Paralysis is usually permanent. But for four men suffering from spinal cord injuries, there is new hope, and scientists say all it took was a zap.

"An electrical stimulator was implanted on the men's spinal cords ... Researchers found the stimulator helped the men move their toes, ankles and knees on their own." (Via WRC-TV)

Spinal cord zaps have been used before. But according to the lead researcher, Susan Harkema, this is the first time a patient's muscles have shown voluntary activity when electrical stimulation was applied directly to the spinal cord.

These preliminary findings will be published in the journal Brain on Tuesday.

Essentially, the stimulation works by retraining the nerve to communicate with the brain, but this progress came as a surprise.

CNN reports the goal of Harkema's study was to analyze how nerve pathways reacted when electrical stimulation was applied to broken spinal cords. So when one of the patients said, 'I can move my toe,' Harkema was shocked.

And so were the paralyzed men. In a phone interview in 2011, one of the first men to receive the stimulator spoke about his improvements.

"Being able to move my toes, ankles, knees on command... it was absolutely incredible .. there are not enough words to describe how I felt. At one point it was just a dream, and now it's reality." (Via NBC)

If that dream-come-true can be proven effective in more subjects, some doctors say it could alter the prognosis of the thousands that are suffering from spinal cord injuries in the U.S.

A doctor not involved in the study told LiveScience, "Spinal cord injury may no longer mean a lifelong sentence of complete paralysis."

But a BBC medical correspondent points out this technique does not actually repair the spinal cord. The four patients involved in the study are still unable to walk without assistance.

More information is needed, but researchers now have the money to implant the stimulator into eight more patients.