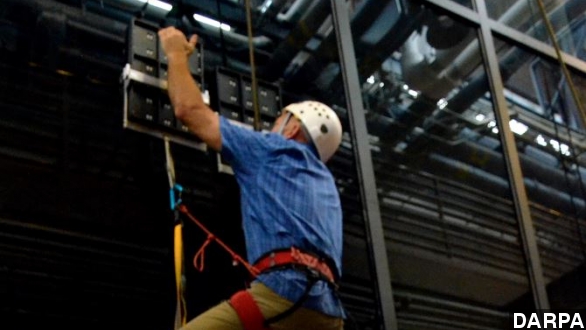 By Cliff Judy
June 11, 2014
Researchers with a grant from DARPA decided there was a fundamental flaw in how others tried to replicate a gecko's climbing ability.
SHOW TRANSCRIPT

Ever wonder how geckos and other animals managed to pull this off? So did the military. The tiny reptiles inspired the Defense Advanced Research Projects Agency — or DARPA — to make soldiers look more like superheroes. (Via Flickr / Wahj, Flickr / Ed Suominen)

Or at least one superhero, in particular. The ability to climb walls no matter how slick would pose advantages to a lot more than just Spider-Man. (Via Columbia Pictures / 'Spider-Man')

This month, DARPA showed off the results of a 2009 grant to Draper Laboratory and University of Massachusetts researchers, who developed what they called Geckskin.

In the test, a 218-pound man carrying an extra 50 pounds climbed two-and-a-half stories straight up a glass surface using nothing but gecko-inspired paddles. While he wore a safety belt, DARPA said he didn't need it.

How does it work? Gecko toes are covered with hundreds of thousands or even millions of microscopic hairs called setae. Normally weak molecular interactions called van der Waals forces get multiplied that many times and give an intensely strong grip. (Via Flickr / Bernat Casero)

The researchers at UMass Amherst believed it wasn't just the gecko's toes doing the work, but the whole structure of the foot. So they mimicked it.

"This allows the pad to drape over a surface to maximize contact. Further, as in natural gecko feet, the fabric is woven into a synthetic tendon yielding a design that maintains stiffness and rotational freedom." (Via University of Massachusetts Amherst)

DARPA points out the development could be huge for soldiers who ideally try for the high ground whenever they can get it, but warfare is rarely ideal and ropes and ladders haven't developed much in thousands of years.

"They also only allow for sequential climbing whereby the first climber often takes on the highest risk."

No word on whether the labs have mastered the spider web-slinging feature to swing from building to building, but DARPA says the research for climbing is ongoing. (Via Columbia Pictures / 'Spider-Man 2')