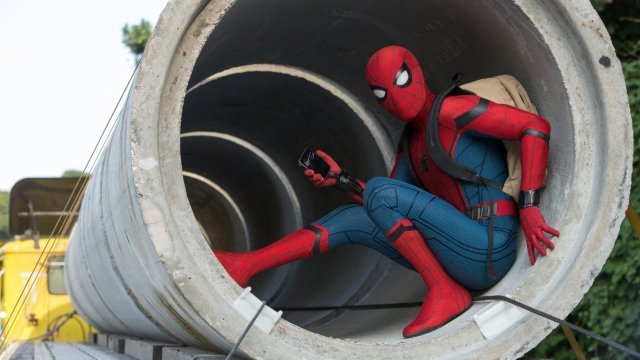 For all the Spider-Man fans who refuse to be hurt again — you can go to the theater in peace. Rhino is not in this film.

Taking the No. 1 spot like a true Marvel movie should is "Spider-Man: Homecoming," bringing in an estimated $117 million in its first weekend out. The new, improved Peter Parker also raked in somewhere north of $140 million at the foreign box office.

Oddly enough, the best debut weekend for the Spider-Man franchise may have been for the worst movie of the group; "Spider-Man 3" managed a $151 million opening weekend back in 2007.

"He's adorable and he's guileless and effervescent and goofy like a kid should be. And it was such a lovely refreshing contrast from the brooding of Andrew Garfield," Christy Lemire said on What the Flick?!

In the past, Spider-Man has been a little more emotional than your average high schooler. But with Marvel Studios back in charge of its friendly neighborhood superhero, Tom Holland managed to give the web-slinging teenager some character traits fans recognize from the comics. And critics really seem to appreciate the change.

Falling to No. 2 this week is "Despicable Me 3," bringing in an estimated $34 million in its second week out. While Steve Carell and company aren't having their best showing at the American box office, "Despicable Me 3" is raking it in overseas. As of Sunday afternoon, the foreign box office was responsible for $298 million.

Finally, falling to No. 3 this week is "Baby Driver," bringing in an estimated $12.7 million in its second week out.

As for next week, the war for the planet is finally here — and you can watch in 3-D with popcorn!