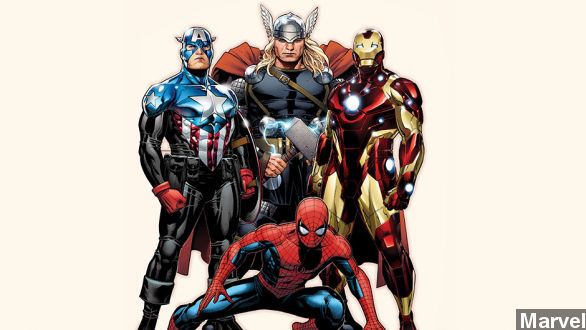 Spider-Man fans everywhere just felt their spidey senses tingling because the web-slinger is heading to the Marvel Cinematic Universe.

In a surprise announcement late Monday night, Marvel revealed an agreement between Marvel Studios and Sony Pictures Entertainment to share the Spider-Man franchise.

That means when we see the Avengers on screen in the future, Spider-Man could be the one yelling the famous line, "Avengers, assemble!" (Video via Walt Disney Studios Motion Pictures / "The Avengers")

Here's what we know about the deal: The "new" Spider-Man will appear in a Marvel film. Sony will release its own Spider-Man installment — the third in its series — in July 2017. Sony's Amy Pascal and Marvel's Kevin Feige will co-produce that film.

If that deal sounds familiar to you, that's because similar details were revealed during the Sony Pictures Entertainment hack late last year.

In the comics, Spider-Man is the third central character to that story's plot — behind Captain America and Iron Man.

Still, it's unclear whether the wall-crawler will debut in that film, as "Captain America: Civil War" begins production soon.

Monday's announcement also stated, "Sony Pictures will continue to finance, distribute, own and have final creative control of the Spider-Man films."

The new Spider-Man film’s release date — July 28, 2017 — formerly belonged to Marvel’s “Thor: Ragnarok.” That film, along with “Black Panther,” “Captain Marvel” and “Inhumans” are all being bumped back a slot in Marvel’s movie timeline. “Avengers: Infinity War Part 1” and “Avengers Infinity War Part 2” will remain in their original slots.

Despite that fact, Spidey is Marvel's most profitable super hero. He webbed in $1.3 billion in global retail sales in 2013.

Latching onto Marvel Studios' massively successful franchise means Sony hopefully gets a hit, Marvel gets its most profitable character and we get a rebranded Spider-Man movie. Looks like it could be a win for everyone.