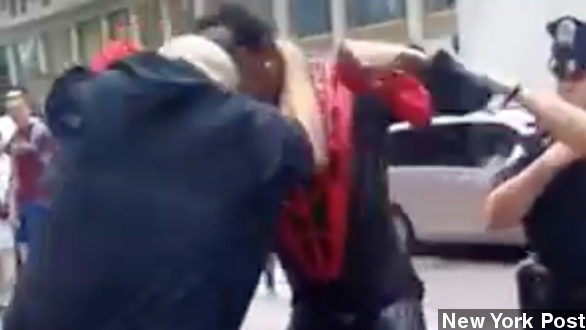 The latest in a string of incidents involving costumed performers harassing Times Square patrons could pave the way for new regulations against those performers. And a less-than-heroic act from Spider-Man is to blame. (Via Andreas Dantz / CC BY 2.0)

Seen in this raw footage obtained by the New York Post, a man wearing a Spider-Man costume was arrested Saturday after he "punched a cop in the face" following a dispute over requesting money from Times Square patrons.

According to WNBC an unidentified woman offered a $1 tip to the man behind the mask, but 25-year-old Junior Bishop refused the dollar and allegedly insisted that he only accepted 5's, 10's or 20's.

Thing is, a nearby cop overheard the conversation, pulled Bishop aside and told the costume web-slinger he wasn't allowed to ask for money. And, that's when things got ugly.

Police say Bishop shot back to the NYPD officer, “mind your own (expletive) business," and continued to yell and swear. (Via New York Daily News)

The officer then asked for his ID and, when Bishop didn't have one on him, police arrested him but he didn't go quietly.

That's when this took place. Bishop has been charged with assault, resisting arrest and criminal mischief and misconduct. (Via New York Post)

And The New York Times says Bishop has "aggressively demanded money from tourists," at least one other time, while performing as a different character.

Costume character arrests have become a frequent free show for tourists wandering through Times Square — something the NYPD wants to crack down on.

There was a man dressed as Sesame Street's Elmo reportedly shouting anti-semitic slurs in 2012. (Via Youtube / ciallkennett's channel)

Another incident in April 2013 when a Cookie Monster performer was arrested for pushing and endangering a young boy. (Via ABC)

Plus, recent sexual assault and groping charges for acts including Woody from "Toy Story" and Super Mario respectively. There was also essentially a turf war brawl between two competing Statue-of-Liberty acts. (Via The Huffington Post, WNYW, Gothamist)

President of Times Square Alliance Tim Tompkins told WCBS, "Quirky is fine. Creepy is not," and that most street performers "are honest folks who are out just trying to earn a living. But there's also some folks who are taking advantage of people."

The Manhattan City Council is currently drafting legislation that forces performers to obtain licenses and go through background checks, but the council has hit a few hang-ups because of copyright constraints. (Via The Wall Street Journal)

Plus, The Wall Street Journal points out requiring licenses could infringe on the performers' First Amendment rights and the policy could be difficult to enforce, as many who perform are illegal immigrants.