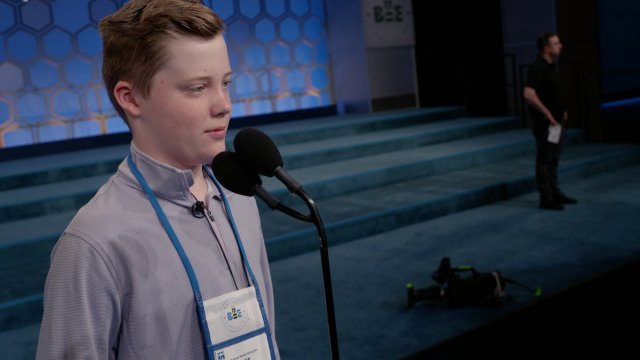 SMS
This Student With Hearing Loss Is Beating The Odds At The Scripps Bee
By Ghazala Irshad
By Ghazala Irshad
May 29, 2019
Kids with single-sided deafness are 10 times more likely to fail a grade. But James Dover is doing so well, he's even competing at the Scripps bee.
SHOW TRANSCRIPT

As 12-year-old James Dover practices spelling words with his mom, you notice his accuracy — and speed. It's good enough to land him at the Scripps National Spelling Bee.

That's impressive on its own. But James' spelling skill is even more remarkable when you learn that he was born deaf in his left ear. The official term is single-sided deafness, or SSD.

It's a common mistake — even in the medical field — to think that single-sided deafness is no big deal. After all, you can still hear out of one ear, right?

But we actually listen with our brains — our ears only deliver signals to the brain so it can interpret them. If you can only hear out of one ear, your brain won't be able to tell where sound is coming from. That could be a problem when you're trying to cross the street, for example.

There are academic challenges, too. In fact, research indicates children with SSD are 10 times more likely to repeat a grade than children with normal hearing.

If you can only hear out of one ear, it takes longer for the brain to drown out background noise, focus on a teacher's words and take notes.

And that delay poses an extra challenge at the Scripps bee, where you only get two minutes to ask questions and spell your word.

There's also something called "the head shadow effect," which makes it tough for people with single-sided deafness to hear high-frequency sounds with shorter wavelengths — sounds like consonants, which are important to hear when spelling.

So how does James beat these odds to do so well in both school and spelling?

"Working with him at an early age, getting him diagnosed early, getting the hearing device in there early."

And thanks to a hearing aid technology called Contralateral Routing of Signal, or CROS, James can hear his teachers clearly in a noisy classroom.

"It helps me focus on the teacher, not listening to my other classmates' conversations and things like that."

We watched James test the technology with bee pronouncer Jacques Bailly before the competition.

"With the hearing device, it goes in the left ear and then transmits the sound to the right hearing aid. So my right ear hears all the sounds from left and right."

But the hearing aid plays only a small part in James' ability to achieve. The rest is hard work.

"You often forget that he does have a handicap because he is so successful."