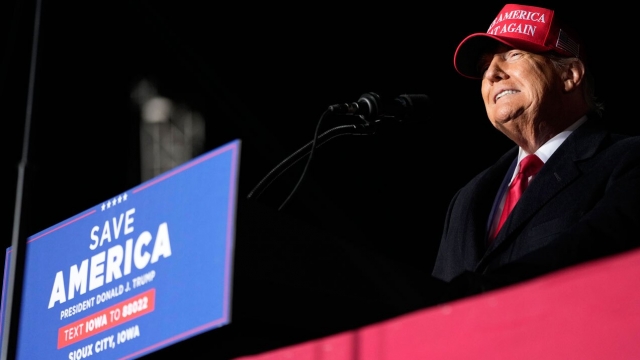 Former President Donald Trump is dropping hints at another possible run for the presidency. With the speculation growing, the spotlight remains on Mar-a-Lago and its influence after Tuesday's midterm elections.

"There's a red wave coming," Michael Barnett, the chairman of the Republican Party of Palm Beach County, said. "Anxious, nervous, but very excited about our chances of winning."

They're strategizing and organizing, but it's not just midterms. All eyes are on Mar-a-Lago and the former president's possible second presidential run.

"Well, we have heard a lot of buzz about President Trump and 2024," Barnett said.

Barnett said first they have to get through Election Day on Tuesday.

"We have to focus on getting Gov. [Ron] DeSantis elected first," he said. "That's our primary job, DeSantis, Marco Rubio. We can worry about President Trump on Nov. 9, but if he declares he is running for president, I'll be the first one to sign up to join his campaign."

We visited Clematis Street on Friday to have a cup of coffee with WPTV political analyst Brian Crowley.

Politics, like a game of chess, is never about the move right in front of you, he told us.

The conversation is also mounting about DeSantis and his aspirations to run for president.

"There has been some speculation this week that Ron DeSantis may put off running until 2028," he said. "Most people think he is still running in 2024."

As far as Mar-a-Lago's influence these days, Crowley had this to say.

"Do I think Mar-a-Lago is losing some influence?" he asked. "Sure. Is it possible that he will get it all back after he announces his run? Possibly."

The former president's influence is also on the table for discussion.

"We will know a lot more about whether or not Donald Trump is the kingmaker on Tuesday," Crowley added.

What we don't know right now is if the Jan. 6 investigation or the Department of Justice's search of Mar-a-Lago will have any weight on Trump's possible run.

This story was originally published by Tory Dunnan on wptv.com.

Milwaukee, Wisconsin was chosen after Tennessee's capital city Nashville took itself out of the running and rejected a draft agreement to host.