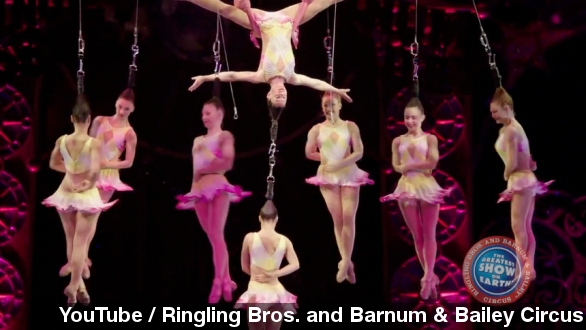 By Matt Moreno
May 4, 2014
A piece of equipment fell during a Ringling Bros. event, injuring several performers.
SHOW TRANSCRIPT

Officials still aren't sure what caused a piece of equipment to fall and seriously injure several Ringling Brothers performers Sunday in Providence, Rhode Island. We should warn you, the following footage is unsettling.

The incident happened during a performance called the hair hang — where performers, all women, hang by their hair several feet above the ground and perform a synchronized routine. (Via MSNBC)

Here is what the routine should have looked like. This video was posted to YouTube by Ringling Bros. and Barnum & Bailey Circus promoting the stunt.

Witnesses told WPRI the performers fell an estimated 30 feet to the ground with the heavy apparatus landing on top of them.

Police announced at a press conference that at least nine performers were taken to the hospital — most with critical, but non-life threatening injuries. The Providence Journal reports in all, 15 to 20 performers were hurt.

CNN spoke with Steven Payne of Feld Entertainment, the parent company of Barnum and Bailey who said this apparatus has been used before with no issues.

"This apparatus had been used for multiple performances each week since this show launched back in January. Each and every time that we come to a new venue all of the equipment ... is carefully inspected."

Ringling Bros. announced all of Sunday's scheduled performances were canceled after the incident.