Spanish Nurse First To Be Infected With Ebola Outside Africa 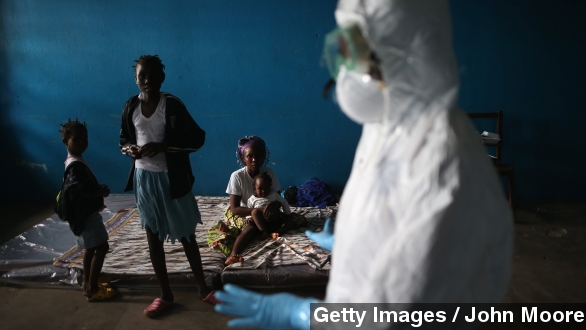 SMS
Spanish Nurse First To Be Infected With Ebola Outside Africa

By Ben Lawson
October 6, 2014
A Spanish woman has become the first person to contract Ebola outside an African country.
SHOW TRANSCRIPT

A nurse's assistant in Spain has tested positive for Ebola, making her the first to contract the disease outside of Africa.

The Spanish Health Minister Ana Mato announced Monday the 44-year-old woman tested positive for Ebola in two separate tests. Her name has not yet been released.

Spanish newspaper El Pais reported the patient was admitted to a hospital with a high fever. Further details on her condition have not yet been announced.

She reportedly contracted the disease while helping treat a Spanish priest who contracted Ebola in West Africa and was sent home for treatment. That man died late last month.

The Telegraph quotes a Spanish health official who says, "All measures have been taken to give the best care to the patient, and guarantee the safety of all citizens."

All 30 members of the team that treated the Spanish priest are now being monitored, and officials are tracking down anyone else who might have come in contact with the infected nurse's assistant.

There have been approximately 7,500 confirmed cases of Ebola worldwide, with the West African countries of Guinea, Sierra Leone and Liberia being hit the hardest.

It's estimated 3,400 people have died during the outbreak so far.