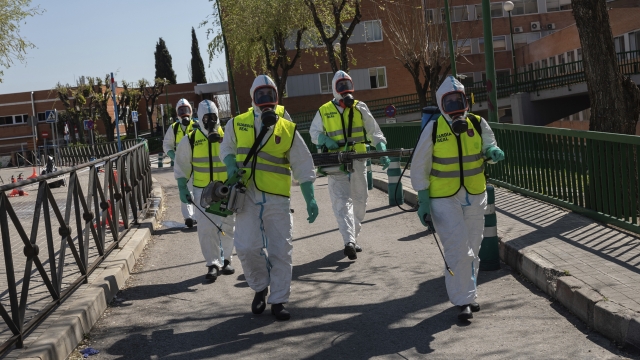 SMS
Spain Tightens Quarantine Orders
By Meg Hilling
By Meg Hilling
March 30, 2020
All non-essential workers are ordered to stay home for the next two weeks in Spain.
SHOW TRANSCRIPT

Government officials in Spain are ordering all non-essential workers to stay home for the next two weeks, as the country continues to address the coronavirus outbreak.

Spain's prime minister announced on Saturday that the restrictions would be in place from March 30 to April 9. During that time, workers will receive their usual salaries, but will have to make up the lost hours at a later date, according to Reuters.

The measure comes as the government works to alleviate the overwhelming pressure the country's health care system is under. Health officials are citing problems handling the growing number of cases, while dealing with a shortage of medical equipment and beds.

According to Johns Hopkins University, Spain is second to Italy with the highest number of deaths recorded as a result of the virus.

Earlier in March, the government banned residents from leaving their homes unless they are buying food or medicine, going to work or to the hospital. Meanwhile, drones are being used to tell anyone out walking in Madrid to go home and police are conducting stops to verify reasons for being out.