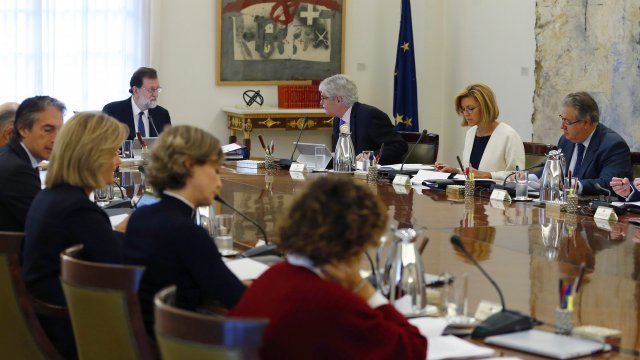 The Spanish government has figured out how it plans to deal with the separatist region of Catalonia, but the road getting to this point has been anything but clear.

On Oct. 1, Catalonia held a non-binding independence referendum that Spain declared illegal. Spanish police cracked down on the vote. That prompted a lot of images and reports of police violence against voters, which Spain's foreign minister insists were mostly faked. Both sides have accused the other of inciting a coup, and Catalonia's leader, Carles Puigdemont, gave a vague speech in which he may or may not have declared independence.

Spanish Prime Minister Mariano Rajoy held an emergency Cabinet meeting over the weekend. He sent a request to the Senate to trigger Article 155, a constitutional provision that allows Madrid to assert control over a regional government.

Rajoy asked for the power to dismiss Catalonia's leader, his Cabinet and all other top officials.

Catalonia's Parliament won't be dissolved but would face new elections within six months of Article 155 being invoked. Catalonia would still have the power of self-rule, but with limitations.

Puigdemont is planning a parliamentary session to respond to Rajoy's plan but said Catalonia won't accept Madrid's effort to take power in the region.