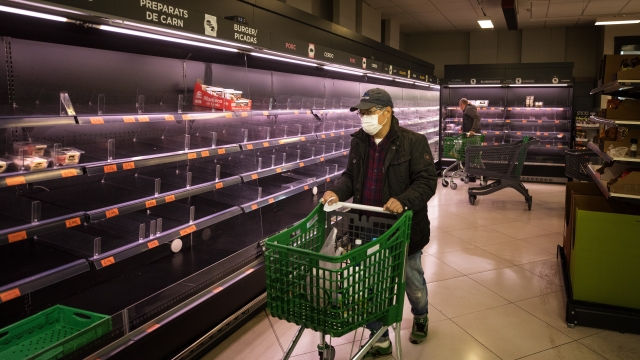 SMS
Spain's Government Expected To Announce Nationwide Lockdown
By Meg Hilling
By Meg Hilling
March 14, 2020
AP report: The government will ask everyone in the country remain at home, unless buying food, medicine or going to work or the hospital.
SHOW TRANSCRIPT

Spain is due to go into nationwide lockdown starting Monday, following the government’s declaration of a state of emergency Friday.

The Associated Press is reporting that the government is asking Spanish residents to remain at home, unless buying food or medicine, going to work, the bank or the hospital. In addition, public transportation schedules will be adjusted for reduced movement and the country’s interior ministry will take charge all police forces nationwide.

Spain follows Italy as the second-hardest hit country in Europe, with the number of confirmed cases of the virus climbing above 6,000, according to Johns Hopkins University.

Spain is also closing schools and universities and shuttering restaurants and hotels. The state of emergency is expected to be formally approved the Spanish cabinet.

It follows an announcement banning travel to the U.S. by people who have visited Europe's Schengen area — which includes Spain — in the past 14 days. The ban doesn't apply to U.S. citizens returning home.

Additional reporting by Joseph Wilson and Geir Moulson of the Associated Press.