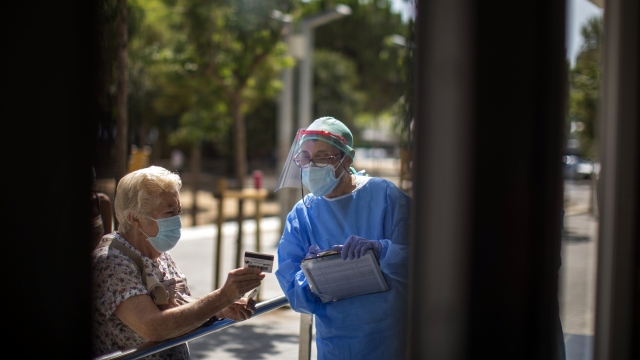 SMS
Spain Pulls Back On Summer Holiday Season As COVID-19 Cases Spike
By Peter Hecht
By Peter Hecht
July 24, 2020
Spain ended its national lockdown on June 21. Since then, the rate of new cases has quadrupled.
SHOW TRANSCRIPT

On June 21, the first day of summer, Spain officially emerged from its worst season imaginable. It lifted a national lockdown and people ventured outside, after harrowing months of dealing with the coronavirus pandemic.

But now, as locals and European tourists return to Mediterranean beaches, Spain is having to dial back its reopening to rein in new infections.

That's because, since June 21, the rate of new COVID-19 cases has quadrupled. Infections are spiking among young people. And the return of tourists is heightening worries of an accelerating virus spread.

To be clear, Spain's rates of deaths and hospitalizations are nowhere near its peak months during the pandemic. Spain has had more than 28,000 COVID-19 fatalities and 260,000 cases.

But with more than 4,500 new cases last weekend, Spain is reporting infection increases in 224 cities and communities.

Bars and restaurants in many areas are now reducing their permitted capacity. Big parties are discouraged and some nightclubs are dark, after nearly 100 young people contracted the virus from a single night at a disco in Córdoba.

In Barcelona, Spain's 2nd largest city, people are again urged to stay at home and, especially, to avoid gatherings of more than 10 people.

The party is also fast winding down in the southern city of Mallorca, where this sign has long warned rowdy tourists to keep their clothes on.

Now a newspaper headline sends another message from the local travel minister: "We don't want those tourists. Don't come." In Spain, the COVID-19 summer holiday, may be nearing its close.