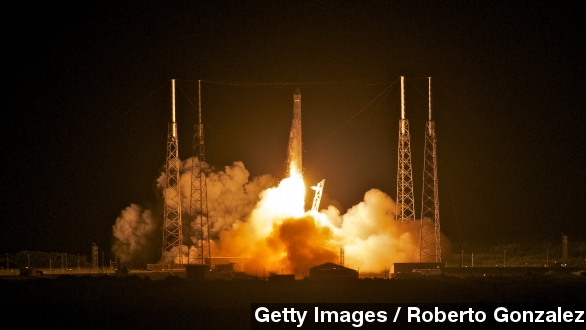 SMS
SpaceX's Elon Musk Really Wants To Colonize Mars
By Jake Godin
By Jake Godin
September 14, 2014
Elon Musk has been talking about his goal of colonizing Mars for years now, but how much of it does he actually have figured out, and is it possible?
SHOW TRANSCRIPT

If it wasn’t already apparent that SpaceX CEO and Telsa co-founder Elon Musk is one of today's more ambitious visionaries, let's remember: he wants to build a city on Mars.

We knew this back in 2012 when Musk gave Space.com a rough outline of what colonizing Mars would need, like a small pioneering group of 10 or so brave souls with construction materials followed by more folks at $500,000 a ticket.

But more recently, he elaborated on why he wants to colonize Mars on the Colbert Report:

ELON MUSK: “I really think it’s important that we’re on multiple planets and a spacefaring civilization so that sort of preserves the future of humanity, it’s sort of life insurance collectively.”

And then there’s this:

The Falcon Heavy — capable of carrying the biggest payload into space since the Apollo program’s Saturn V and what Musk sees as humanity's ticket to Mars.

While SpaceX has yet to do any test flights with the Falcon Heavy, Musk told CNBC earlier this year he’s hopeful his space company will get people to Mars by 2026.

ELON MUSK: “I’m hopeful that the first people can be taken to Mars in 10 to 12 years. I think it’s certainly possible for that to occur.”

But SpaceX isn’t alone in its space-faring dreams. The space company is currently competing with Boeing and Sierra Nevada for a NASA contract to ferry astronauts to and from the International Space Station by 2017.

According to Bloomberg, winning the contract would be a “pivotal step” in Musk’s master plan of colonizing the Red Planet, though an analyst told the business news site that a joint award between Boeing and SpaceX is most likely.

Of course, just because we'll be able to get to Mars doesn’t quite mean we’ll be ready to move in yet — colonizing a barren planet 140 million miles away does have its challenges.

A writer at ExtremeTech says the most likely scenario is that we’ll be doing flybys of the planet before actually being able to set up shop on its surface.

And while a Discover Magazine writer was a big fan of getting out and colonizing Mars, he warned that humanity should try to stay a little closer to Earth until we figure out what the long-term effects of life in low gravity does to the body and reproduction.

In any case, NASA is set to announce the winner of its space ferry contract later this month.