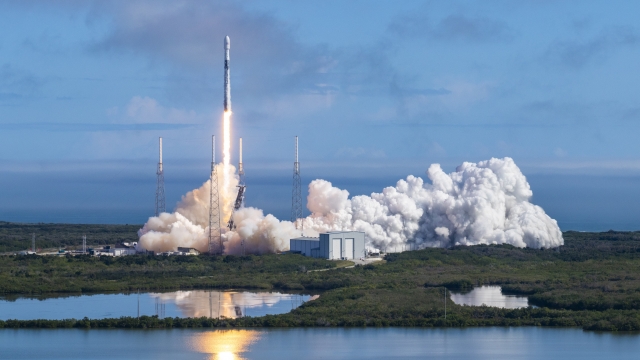 The Starlink mission is meant to create a massive constellation of satellites that would offer worldwide high-speed internet.

Flames and smoke billowed from beneath the SpaceX Falcon 9 rocket on Monday as the booster successfully transported another batch of 60 satellites into orbit.

Falcon 9 launched from the Cape Canaveral Air Force Station in Florida and marked the fourth launch in the company's Starlink mission this year. The goal is to create an extensive constellation of satellites that provide worldwide high-speed internet coverage.

Following a seemingly successful launch, the Falcon 9 returned to Earth but didn't quite stick the landing. Instead of landing on a waiting drone ship, the rocket missed its mark and took a dip in the Atlantic.

SpaceX said the rocket appeared to be intact after making a "soft landing" in the water. If the booster had docked correctly, it would have been a landmark 50th successful landing for the company.

SpaceX reportedly has about 300 satellites in orbit but plans to launch thousands more. The company has said internet service from its satellites could be available in the northern U.S. and Canada as early as this year.