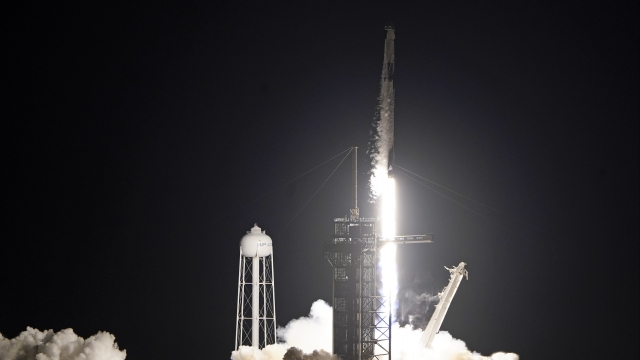 The mission is expected to last three days, as the crew orbits at an altitude above the International Space Station and the Hubble space telescope

“Today’s really different in that this is a different kind of launch than many we’ve watched even recently that were amazing in their own right. This is normal people thinking just like we would be,” said Lu Johnson, who traveled from California to see the launch.

Families gathered across the water from the launch to catch a glimpse of the mission carrying a crew with a wide range of experiences and backgrounds.

The crew underwent astronaut training, simulations, studying and even a mountain climb in preparation. It’s led by mission commander Jared Isaacman, the CEO and founder of Shift4Payments.

“We set out from the start to deliver a very inspiring message - certainly what can be done up in space and the possibilities there, but also what we can accomplish here on Earth,” said Isaacman.

Sian Proctor, Ph.D. is a geoscientist and educator serving as the mission pilot.

“It’s really special for me to hold that time because I’m gonna be the first black female pilot of a spacecraft.” Proctor said.

Christopher Sembroski is the mission specialist, an Air Force veteran with experience in the aerospace industry.

“I have a huge responsibility to pay that forward,” said Sembroski.

The medical officer is Hayley Arceneaux, a physician assistant at St. Jude Children’s Research Hospital, where she was treated as a child for bone cancer. The mission has a goal of raising $200 million for the hospital. Part of that effort includes bringing unique items into space to later auction off, like the first NFT by Kings of Leon to be played in orbit, a ukulele and artwork.