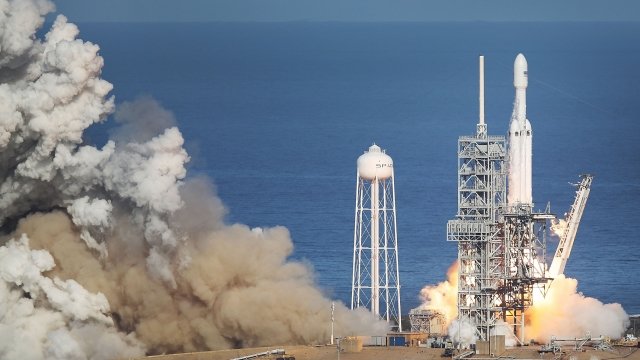 SMS
SpaceX's Falcon Heavy Launch Was Impressive Despite Years Of Delays
By Steven Sparkman
By Steven Sparkman
February 6, 2018
Elon Musk's predictions that the rocket would launch in early 2013 were wildly optimistic, but the original plan wasn't this cool.
SHOW TRANSCRIPT

It's taken a while, but SpaceX has finally launched its Falcon Heavy rocket, sent a car cruising through space — and stuck two landings at once. Not only did the launch go as planned, but the first stage boosters landed safely and can potentially be reused.

Managing synchronized rocket landings after a successful launch is a big achievement. Before the launch, SpaceX founder Elon Musk said he'd consider the flight a win even if the whole rocket exploded, as long as it cleared the launch pad.

The main drawback of the launch is the fact that it was originally supposed to happen five years ago. When Musk announced the Falcon Heavy in April 2011, he said he expected it to fly in early 2013.

The delays eventually cost SpaceX a customer. British satellite company Inmarsat had contracted with SpaceX but wound up using a different carrier when it couldn't stand to delay one of its satellites any longer.

But as the delays grew, so did the ambitions. Landing the rockets wasn't originally part of the plan. Neither was sending a convertible on a billion-year trip around the sun.

Now, SpaceX can move on to more practical cargo. It already has Falcon Heavy flights lined up for the U.S. Air Force and communications company Arabsat for later this year.