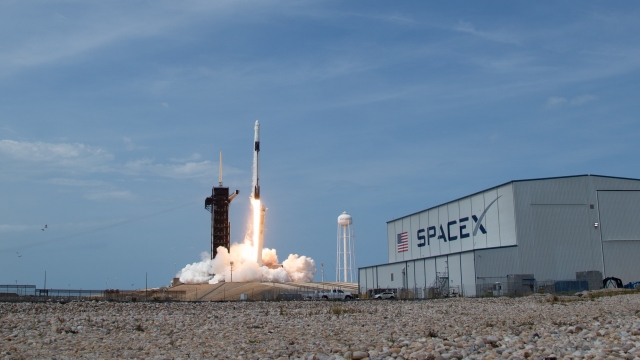 SMS
SpaceX Crew Dragon, Now 'Capsule Endeavor,' Docks At Space Station
By LeeAnne Lowry
By LeeAnne Lowry
May 31, 2020
The astronauts are expected stay on the space station for one to four months.
SHOW TRANSCRIPT

"Soft-capture confirmed, stand by for retraction and docking."

About nineteen hours after they launched into orbit aboard the SpaceX rocket, two American astronauts on Sunday docked with the International Space Station.

The takeoff from Florida's Kennedy Space Center was historic for a couple of reasons: it’s the first time NASA astronauts have launched on a rocket from a single private company. And astronauts Bob Behnken and Doug Hurley became the first manned crew aboard a NASA launch from U.S. soil since 2011.

As is tradition, the astronauts named the ship before they took an eight-hour sleep break. The crew dragon capsule was dubbed "Capsule Endeavor."

The Capsule Endeavor attached to the space station about 250 miles above the earth — right above eastern China — at 10:16 a.m. Eastern Sunday. Since this is a test mission, the astronauts used the manual control function for a bit before automation took over again to dock.

Hurley and Behnken are expected stay on the space station for one to four months, zipping around the earth at 17,000 miles per hour.