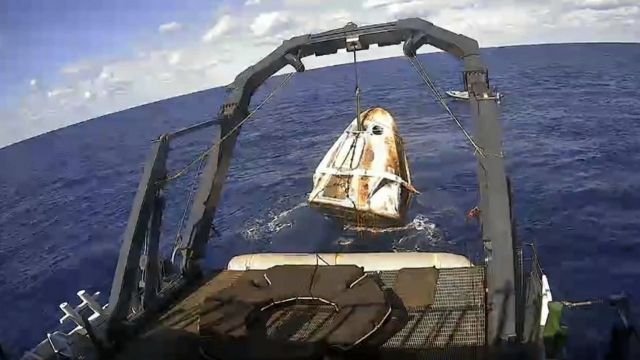 SMS
SpaceX Crew Dragon Capsule Successfully Returns To Earth
By Katherine Biek
By Katherine Biek
March 8, 2019
The flight test that began about a week ago puts SpaceX a step closer toward proving its spacecraft can carry humans into space.
SHOW TRANSCRIPT

After detaching from the International Space Station around 2:30 a.m. ET, the unmanned spacecraft splashed into the Atlantic Ocean hours later, landing about 200 miles off the east coast of Florida.

The successful flight test that began about a week ago puts SpaceX a step closer toward proving its spacecraft can carry humans into space.

That would be an important milestone, since NASA hasn't flown its own astronauts into space since it ended its Space Shuttle Program in 2011. Since then, American astronauts have hitched rides on Russian rockets and spacecraft to get to the ISS.

But seats on Russia's Soyuz rockets cost about $80 million per astronaut, so NASA's teamed up with both SpaceX and Boeing to make space travel a little more cost-effective.

SpaceX officials will next analyze data its capsule brought back from its mission and make any necessary adjustments before testing the Crew Dragon's emergency abort system in June. If all goes well, SpaceX is slated to send two NASA astronauts into space as early as July.