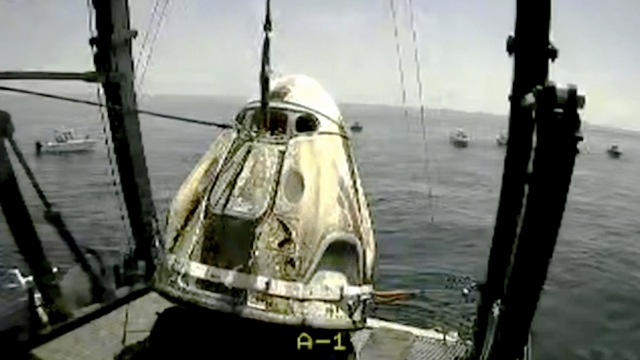 The long-awaited SpaceX Crew Dragon made splashdown Sunday in the Gulf of Mexico. It was the first water landing by a manned NASA spacecraft in 45 years and Crew Dragon's first completed flight.

NASA confirmed the Capsule Endeavor began its de-orbit burn around 1:56 p.m. eastern. The aircraft officially splashed down at 2:48 p.m. eastern in calm waters, coming in at about 15 miles an hour.

A SpaceX recovery ship with more than 40 staff, including doctors and nurses, met the astronauts in the water. With the coronavirus in mind, all recovery staff quarantined for two weeks leading up to the landing.

SpaceX made history with this mission, which launched May 30 from Florida. It was the first time a private company launched people into orbit and also the first launch of NASA astronauts from U.S. soil in nearly a decade.

President Trump called the landing "very exciting" and added in a Tweet: "Great to have NASA Astronauts return to Earth after [a] very successful two month mission. Thank you to all!"