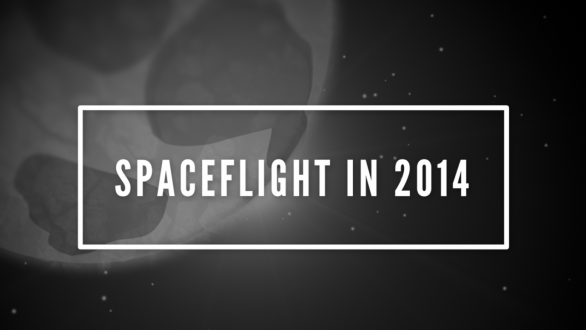 2014 was an exciting year in space exploration. There were historic firsts, glimpses into the future and some concrete steps toward putting humans on Mars. Let's take a look at some of the biggest stories.

"Today, we're one step closer to launching our astronauts from U.S. soil on American spacecraft and ending the nation's sole reliance on Russia by 2017," said NASA administrator Charles Bolden.

In September, NASA gave nearly $7 billion in contracts to Boeing and SpaceX to help both companies eventually carry humans to the International Space Station. (Video via NASA)

Currently, only Russia's Soyuz spacecraft can do that. It flew four missions this year, carrying three people each time, including four Americans.

Both SpaceX and Boeing also let us see the vehicles they're building to do the job, both capable of carrying seven passengers and hopefully entering testing in 2015.

Another private space company, Orbital Sciences, made big strides this year, delivering its first two cargo missions to the ISS. But in late October, on what was supposed to be its third trip, disaster struck. (Video via NASA)

The company's Antares rocket suffered a fatal malfunction, sending its payload, including satellites and student science experiments, up in flames. (Video via NASA)

Just three days later, Virgin Galactic, a company which plans to sell tickets to space, had an even more tragic accident when its test vehicle SpaceShipTwo broke apart over the Mojave Desert, killing one pilot and injuring another. (Video via WJLA)

The CEOs of both companies say their organizations were shaken by the tragedies, but are busy refining their vehicle designs and plan to continue operating in 2015.

Stepping away from private companies, NASA reached some early milestones toward getting humans farther into space than ever before, including Mars. The Orion spacecraft, designed to carry a four-person crew beyond low Earth orbit, zipped around the planet twice in a successful early test flight.

NASA also officially began building the rocket that will send Orion farther out into the solar system. The Space Launch System will be the most powerful rocket ever built, and the first pieces were completed this fall.

2014 started off with some robot drama as China's Jade Rabbit rover had an unexpected malfunction, causing it to freeze up during the moon's long, frigid night. (Video via CCTV)

The story really got a reaction.

Yeah, those were the rover's official last words.

Luckily, several other tense moments involving robots in 2014 had much happier endings. The European Space Agency's Rosetta probe, which had been in hibernation for 31 months, woke up as scheduled in January. It later went on to carry out the high-profile comet landing in November.

And NASA's New Horizons probe, which had spent the better part of a decade in hibernation, also woke up as planned as it approached Pluto in early December.

There was even a kind of underdog story, with India getting a probe to Mars for way less than the cost of any recent "red-planet"-themed Hollywood movie.

2015 is shaping up to be a big year in spaceflight, too. SpaceX, which hopes to make its vehicles reusable, will test a new system to land a spent rocket on a floating launchpad instead of letting it crash into the ocean.

Astronaut Scott Kelly and cosmonaut Mikhail Kornienko will begin a one-year stay on the ISS to see how prolonged time in space affects the human body, and much more. (Video via NASA)

This video includes images from NASA and Nesnad / CC BY SA 4.0.