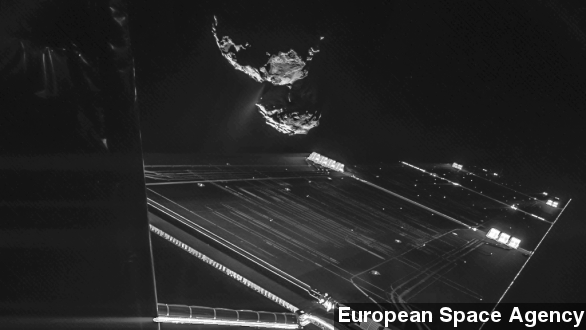 Selfies are all the rage — #obvi — but, what about selfies for outer space robots? Now THAT is impressive.

Check this one out by the European Space Agency's Philae lander, part of the Rosetta mission. Philae can be seen sizing up its next opponent — Comet 67P/C-G.

ESA was given final confirmation to land on comet 67P from the Lander Operations Readiness Review on Tuesday. The BBC reports that a successful mission will be difficult and will likely need a healthy dose of luck too.

"To get down safely, Philae will have to miss some large cliffs and boulders. Little is known about the composition and strength of the comet's surface layers. The fear is that the robot could simply bounce off 67P in what will be a very low-gravity environment. Foot-screws and harpoons will be deployed at the moment of touchdown to try to ensure that does not happen."

The ESA describes this mission as "the first-ever attempt at a soft touchdown on a comet."

Philae has been orbiting the comet for a little while now, choosing exactly where to land on the comet, known as 'Site J', back about a month ago.

New Scientist points out that this latest selfie from Philae is slightly, yet largely different from this one last month. Look at how much further away Comet 67P is. The outlet reports that was the lander orbiting about 30 miles from the comet. This newest selfie? Hanging out just 10 miles away.

This robot-on-comet mission by the ESA will likely help NASA scientists plan their 2021 mission to lasso an asteroid and put humans on it.

The Rosetta mission is about a month away from releasing Philae onto the comet. The ESA says November 12 is the targeted landing date.