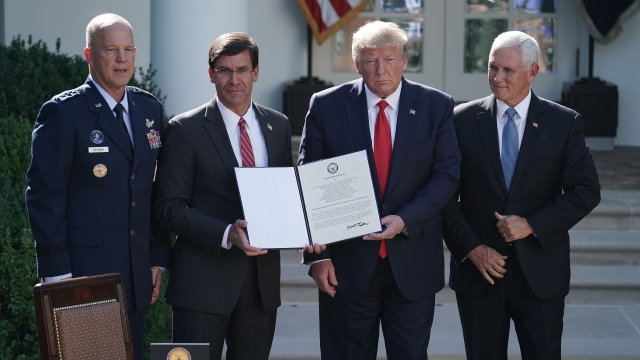 On Thursday, President Donald Trump participated in a ceremony reestablishing the U.S. Space Command after 17 years.

The program was eliminated in 2002 after 9/11 shifted parts of the government's focus to combating terrorism. But the president revived it amid new concerns about U.S. satellites that are susceptible to anti-satellite weapons from countries like China and Russia. The command will allow satellite-based navigation and communications for troops in the field. It will also be able to warn the U.S. when missiles are launched abroad.

During the ceremony, the president spoke to the national security and defense the Space Command will ensure.

"Just as we have recognized land, air, sea and cyber as vital war-fighting domains, we will now treat space as an independent region overseen by a new unified geographic combatant command."

The president said the Space Command will ensure the U.S.' "dominance in space is never questioned and never threatened."

It will be led by U.S. Air Force Space Command General John Raymond. He also said this establishment of the 11th combatant command is a landmark moment.

After the president's remarks, Defense Secretary Mark Esper signed the documents to officially reinstate the Space Command. Esper said on Wednesday, "To ensure the protection of America’s interests in space, we must apply the necessary focus, energy and resources to the task, and that is exactly what Space Command will do."

President Trump also said establishing the Space Command is a crucial step toward the creation of a Space Force, an initiative he's been pushing for but that has yet to receive congressional approval. The Space Force would be a sixth branch of the armed services that is assigned missions by Space Command.