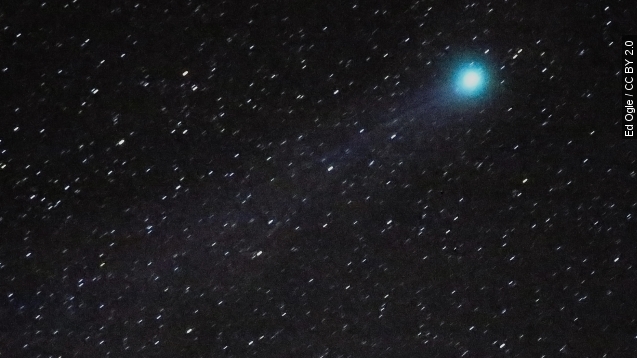 SMS
Space Booze, Anyone? This Comet Is Spewing Alcohol
By Carter Woodiel
By Carter Woodiel
October 25, 2015
NASA says a comet near the sun is releasing large amounts of ethyl alcohol, which is in alcoholic beverages.
SHOW TRANSCRIPT

It appears the solar system is ready to let loose a little bit. Scientists say a comet near the sun is giving off large amounts of alcohol. (Video via gianni / CC BY 2.0)

According to a release from NASA’s Goddard Space Flight Center, the comet Lovejoy was the first observed comet to shoot out ethyl alcohol as it emitted gas when heating up near the sun.

And yes, that's the same type of alcohol found in beer and liquor.

This wasn't just a night-on-the-town's worth of alcohol, either. NASA says at its peak, Lovejoy emitted enough alcohol for 500 bottles of wine per second, enough to keep the space party going on and on.

But this is more than just some good news for those looking to whip up some space wine. It could provide clues as to how life began on Earth.

Comets are important to researchers because they contain preserved dust that could be as old as the solar system itself, allowing for close study of matter as it was billions of years in the past. (Video via NASA)

Scientists speculate comet impacts on Earth could have delivered complex molecules, like amino acids and sugars, that helped kick-start life over 3 billion years ago. (Video via National Geographic)

This theory lines up with Lovejoy's emissions. Researchers say 21 different organic molecules, including a simple sugar, were shooting out of the comet. (Video via NASA)

If the theory is true, we owe a debt of gratitude to comets for helping us enjoy life on Earth — though, don't send Lovejoy a bottle of wine. It sounds like it's got that covered.