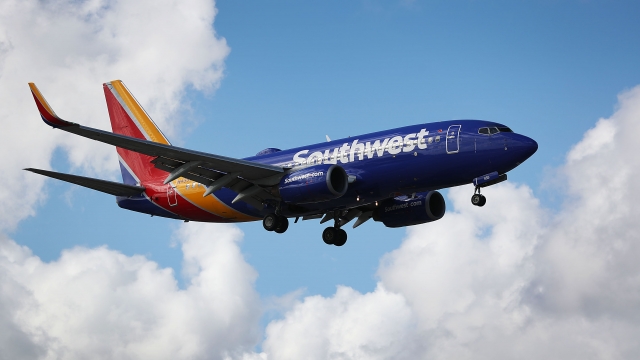 SMS
Southwest Plans To Go Without Its 737 MAX Planes Through Early August
By Katherine Biek
By Katherine Biek
April 12, 2019
It's the second airline to extend flight cancellations after the U.S. grounded all Boeing 737 MAX airplanes indefinitely.
SHOW TRANSCRIPT

Southwest Airlines announced it's planning to go without its Boeing 737 MAX airplanes for the next several months.

The airline has 34 737 MAX planes in its fleet. Those planes, and all others operated by U.S. airlines, were grounded indefinitely on March 13 after two fatal crashes involving Boeing 737 MAX 8 aircraft.

As a result of the temporary loss of part of its fleet, Southwest announced late Thursday that it's now taking the aircraft off its schedule through Aug. 5.

The airline didn't specify how many flights will be canceled, but it was reportedly averaging about 130 cancellations a day in March over the grounding of its 737 MAX planes.

American Airlines announced this week that it was similarly extending its 90 flight cancellations per day through at least June 5.

Meanwhile, United Airlines, which operates the fewest number of 737 MAX aircraft of all three U.S. airlines that fly the models, previously said it didn't anticipate the grounding to have a "significant operational impact" on its business.