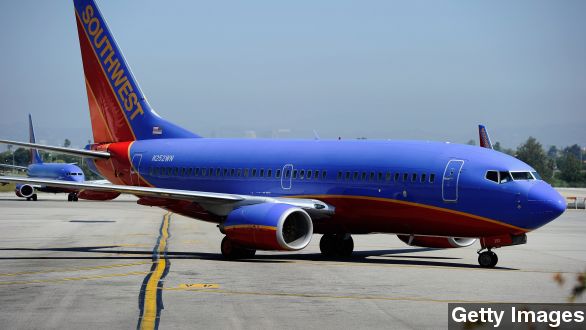 By Jamal Andress
July 28, 2014
The FAA is accusing Southwest Airlines of improperly repairing the fuselage skin of their planes, an issue which has lead to emergency landings.
SHOW TRANSCRIPT

The FAA has smacked Southwest Airlines with a $12 million fine, accusing the airline of improper repairs. And while the supposed faulty repairs didn't cause any injury, the FAA says they could have. (Via Getty Images)

According to the FAA, Southwest Airlines conducted "extreme makeovers" to 44 jetliners to "eliminate potential cracking of the aluminum skin" starting in 2006. But the popular airline didn't meet federal standards for these repairs.

Southwest contracted the work on more than 40 Boeing 737 planes to Aviation Technical Services who are also under investigation.

The FAA said in a statement concerning the fine, "Safety is our top priority, and that means holding airlines responsible for the repairs their contractors undertake. ... Everyone has a role to play and a responsibility to ensure the safety of our transportation system."

Since 2006, Southwest Airlines has only had one crash landing, and that resulted in zero fatalities. But the airline has also had three emergency landings, two of which were caused by holes in the fuselage skin.

"One of the other passengers on the other side of the aisle looked up and said, 'I can see sky!' and that's when I really got worried." (Via Fox News)

The most recent emergency landing came in 2011 when Southwest Flight 812 was forced to land in Arizona after a hole in the plane caused rapid depressurization at 34,000 feet.

"I got the baseball cap out of my face and I look up and there's the sun coming through the ceiling." (Via NBC)

Any backlash from consumers over these last two incidents seems to have passed. Southwest brought in a record quarterly profit of $485 million. The FAA has given the airline 30 days to respond to its allegations.