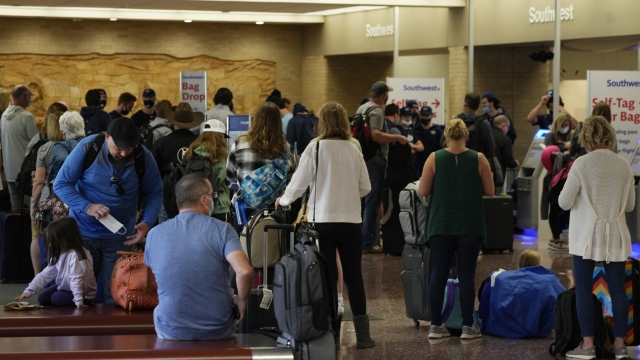 SMS
Southwest Airlines Cancels Over 300 Monday Flights
By Ben Schamisso
By Ben Schamisso
October 11, 2021
No exact date has been set for when passengers can expect Southwest's operations to be fully back to normal.
SHOW TRANSCRIPT

Thousands of passengers are still waiting to see the wheels go up after Southwest Airlines canceled more than 2,000 flights over the weekend — disrupting travel plans and sleep for many.

Ben Schamisso: "What's it been like sleeping in an airport?"

Monday, nearly 1 in 10 Southwest flights have been canceled and more than 1,000 have been delayed nationwide.

The problems have affected several major Southwest destinations including Denver, Baltimore and Chicago.

In an internal memo obtained by Newsy on Sunday, the airline blamed a combination of air traffic control issues, bad weather and staffing shortages across its Florida stations.

But the FAA says no staffing shortages have been reported since Friday.

Many people speculate the meltdown was caused by a "pilot walkout" after Southwest announced a vaccine mandate for its employees last week.

But according to the Southwest Airlines Pilots Association, pilots were "not participating in any official or unofficial job actions."

While the airlines' cancellations are down significantly Monday, it'll be well into the week before some passengers finally reach their destinations.

In a statement released Monday, the airline said its teams have been working diligently and "hope to restore" its full schedules "as soon as possible."

But for some people, the wait has been long enough.

"If you're going to have people stay the night and stuck in airports, make it so they have facilities to be able to lay down it other than the floor," Czerwko said.

No exact date has been set for when passengers can expect Southwest's operations to be fully back to normal.